How the Little People got saved. 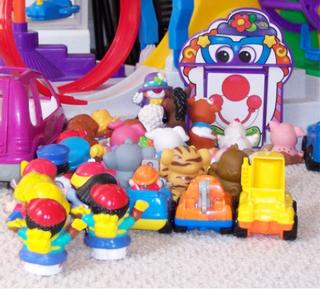 Okay that's not really what this picture was about but doesn't it remind you of a street preacher with a whole bunch of people lined up listening? It does me!

The other day Caroline announced that the Little People were having a Circus. I turned around from my computer and saw that she had lined all of them up this way. She had the clown up a little higher like he was putting on a show (or preaching, hehe) and it looked hilarious!

The Little People do lots of fun things like play at their park, ride a hay-ride out to the farm, go to the amusement park or take their mini-van to Walmart and get groceries. Sometimes they might go to the garage to get their cars fixed - that's where the "fixer-man" works. ha! Most days they just get in their big yellow school bus and go to school.
Posted by TracieClaiborne at 12:15 AM

LOL! Too cute!! Definately some "Toy Story-style" church going on there!

Okay Sissy! I've finally gotten onto your blog and may I say I've spent the last hour+ reading your back entries. This one - the little people get saved - too cute. I loved the "Running Commentary" so much because I've lived it with Caroline on numerous occassions. Then, I laughed until I cried (literally - tears running down my face) when I read "Life at the DMV". You should consider doing stand-up comedy in your spare time. Now that I'm caught up, I'll check in more often.

I miss my little people....can I come over and play with Caroline's little people sometime? I know you think I'm a nut, but I have such wonderful memories of playing with my little people and their various apparatus... Wouldn't it be great to play like a kid again and not feel guilty about housework and everything else you ought to be doing? On that uplifting thought, I'll sign off. LOL!

oh and look at the twin boys in the back of the crowd....
this is much cuter than the purple goo i found on the kitchen ceiling last week
kellicrowe