Tiffany and I made a whirlwind trip over to Murfreesboro today. We stopped by a new store in Smyrna and visited two in Murfreesboro. The one in Smyrna was TINY and I think I own more than they had in the store (seriously). The owner was very sweet so hopefully she'll have more inventory soon. The biggest store in Murfreesboro, Scrappin USA, had a nice inventory as always but we were very upset to realize how over-priced they were!!! We would have spent much more but they were so over-priced it was ridiculous. Their two-sided paper was ALL .90 cents each! Scenic Route, Junkitz, SEI, etc. It should all be less than that. The only paper that retails for over .80 is Wild Asparagus (that I know of). They were over $1.00 more on an item Tiff saw at a store in KY recently. Very irritating. They did have the new KI Christmas, the new Scenic Route Christmas, new Junkitz Christmas and Twitterpated by SEI. As much as it killed me, I had to get a little of the SEI. I just hate paying too much!!!!

The last store, Sassy Scrapper, in Murfreesboro was okay inventory wise but I was impressed by how friendly they were! They had some KI alpha soup opened for .30 per letter and I was able to spell out "fall" so that made me happy. I have wanted KI soup but been too cheap to buy a whole can. I'm tempted now that I've rummaged thru the letters. They are too cute. I got some American Crafts ribbon by the yard there (for considerably cheaper than they were selling it at the second store) and the January CK. January?! Kinda freaky but I couldn't pass it up. On first glance it seems to be a better issue than it has been lately.

We had a fun day - had a great dinner at a place called Don Pablo. Yum. 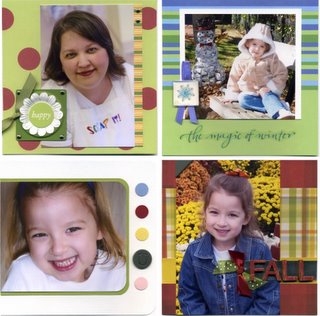 Here are my four 6x6 layouts I did at the crop last night. They will be displayed in our store window. I enjoyed scrapping 6x6 for a change!!!

Don't you love days of shopping!! I totally agree with you about the store in Smyrna. I went there a few weeks ago and was so disappointed. I haven't been to the other 2 lately. I hate driving that far...feels like I'm going to the other side of the world. :)

Hey - Sounds like you had a good day. Your layouts look great. The photo of Caroline is impressive on your Fall page. Great close-up from practically the waist up. Did your camera capture that shot, or did you alter it on your computer? Love it!

Man, I've gotta get out of this scrappin' funk....I wanna scrap, but just can't get the juice flowing, ya know what I mean?

I hear you on cringing at paying way over full price for paper, especially when I can get most of it at my store with my 40% disc.

Those layouts are too cute! The photos are great! Glad to hear you had a good time! Talk to you soon!

Your 6x6's turned out great. Looks like your MOJO must have been sitting across from you!