We have had such a great week! It has been very hot here but beautiful. Yesterday, Caroline and I went by the lake under some huge trees and had a little photo shoot. I don't think these turned out as crisp as I thought they would but it's probably due to low light. I'm trying to avoid using the flash but I know I have a lot to learn about light. I'm going to study light this week. I know for sure that these shots would have been really dark with my other camera. I might end up lightening these a little before printing. Not sure.

I was able to get more natural expressions out of her than I did with my other camera because of no shutter lag and just having so much fun taking pictures. I took way more than I normally do because having this camera makes me feel like a real photographer. It just feels right in my hands. Here are some of my favorite shots... 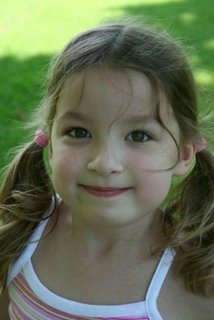 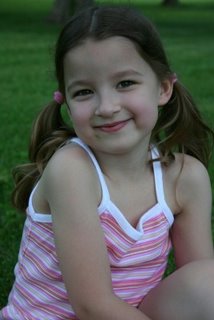 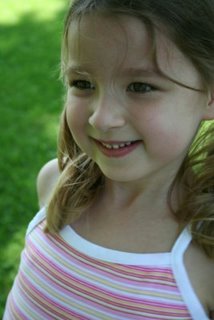 And the last one is from tonight. We were at my Mom's playing with bubbles. I tried out the night-time function but I don't know if this was taken with it or not. Can't remember. I'm trying to get more "real-life" shots of Caroline. My sister was blowing bubbles and she was catching them. I think this pic really captured the moment! 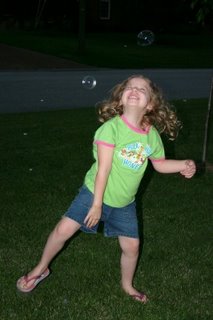 I would have uploaded these last night but I didn't know how and I am terrible about reading manuals. Tonight I just opened my Kodak software from my other camera and plugged in my new camera to the USB port and turned it on and hoped they would upload. I had to find the file but they went right in and even faster than my other camera! It amazed me how they flew up on the screen.

Thanks for looking!! I'll take more tomorrow of Caroline in her Easter dress. I hate most of the shots I got on Easter. Maybe I can get some better ones tomorrow in the same dress.

God bless and stay cool!
Posted by TracieClaiborne at 11:10 PM

Wow, great shots! Just love the photo with the bubbles. Glad you are having so much fun.

I absolutely LOVE the third picture! It is BEAUTIFUL. Welcome to the world of Kodak! Aren't they so "easy to share"!?

Wow, Tracie!
Your pics are gorgeous.

One of these days I will buy a new camera and hopefully it will be one like yours. :)

These are great! I'm going to have to try this spot!

Caroline looks so grown up! And beautiful!

She is such a natural beauty. I must say though,-she does look like she's growing up! Hate when that happens. Gorgeous, none the less!