I thought I'd give you all an update on the progress of the tornado aftermath in my neighborhood. If you remember, in April, my neighborhood was hit hard by the tornado. Every street around us except ours was hit. (Thank you Jesus.)

Here are a few pics I snapped out the car window to show you what's going on. Out of about 12-15 houses at the end of our street, only 2 remain untouched that I can think of. One has a tarp on the roof but no one can live there. One lot is vacant, after having been cleared of the destruction (it's for sale actually). The other one looks like this... 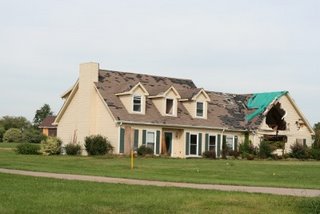 On both sides of the house above there is new construction in progress. There are about 15 new houses going up. Almost all the houses in the area had to have new roofs and one had to fix the foundation, tear all the brick off, re-brick and re-roof but it is done now. It's interesting to see the new houses go up. Five houses down from me, at the end of my street, there was a nice cream wood colonial, much like the one in the picture above. It was the first one I saw that horrible afternoon after the storm when I drove oblivious down to the end of my street. Now this house stands in its place... 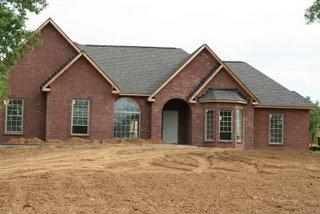 To the left of the demolished one above (first pic), there used to be a house we called "the Elvis house" because it looked like a tiny Graceland. Kind of outdated looking. Now this one is going up in its place. I think it will be similar but it's more modern looking. 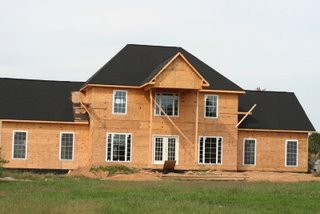 It seems only a few people are using their same foundation. Most are choosing a different house style altogether. I'm sure the pictures and personal treasures lost in the storm are irreplaceable but most of the houses being built are much nicer than what originally was there. That's interesting to me.

Just thought I'd give you a little update. There's a storm raging outside right now so maybe that's what reminded me!

Have a great weekend!
Posted by TracieClaiborne at 11:54 PM

Almost 6 months. Do you know if any of your neighbors moved away or are choosing not to rebuild? I don't think I could do it.

I suppose if I had to rebuild tho, I would use the opportunity to upgrade. Might as well get something good out of all that horror.

Prayers for your neighbors. God is good to all.

This is totally strange -- we just drove through Goodlettsville TODAY on Brick Churck Pk. looking at the damage and progress. Then I popped onto your blog and you had posted this update. The progress didn't look as good there as your pics do of H'ville. There were still several bldgs. that had tarps over their rooves (sp?), and there was one in particular that was nothing but a foundation left - no rebuilding. Bill Crooks store had the roof back on, but the bldg. was completely empty. I wonder if they are going to go back in biz?

Thanks for the update. A good reminder to say prayers for those families affected.

I was in Gallatin behind Lowes a month or so ago, and most all the houses were still down to foundations. Sad that it takes these people so long to get insurance money back to start over again. Not harping on insurance companies...because I love mine, but they sure have their hand out when it comes time for a payment....look how long it has taken some of these people to get their insurance money. From what I have heard some people still don't have it back.