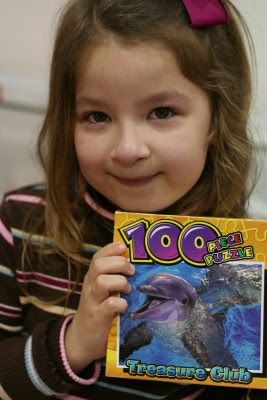 Both parties were great. At the homeschool party, we did a puzzle exchange which I thought was brilliant. Each child brought a puzzle for their age. 5-10 year olds brought a 100 piece and it had to be for a boy or girl. They played hot potato with the gifts and Caroline got one with a dolphin. Here she is with it. She and her Daddy put it together last night. Can you tell she's been crying? Someone hurt her feelings during musical chairs and she couldn't stop crying. She was on a crying jag! She finally perked up before the gift game but then later I asked her if she had fun despite her hurt feelings and she started up again!

They also did a Christmas card craft and the Moms played musical chairs. I was determined to win so I kept sticking my butt out as I went around. (Can you picture it?) The music stopped and I tried to sit down but I slipped and fell instead!!! Everyone cracked up, including me. It was hysterical. Today I have a bit of a bruise on my arm. I didn't win either! Toot!

The funniest thing was when I went in the bathroom later and slipped on some water and literally did the splits. Only the wall kept me from going all the way down. My body is not made to do the splits. Trust me. Ouch. Sorry - I don't have a picture of that!!

Here's a funny picture from Sunday night. This is the real Caroline. She runs around the house non-stop until she's sweaty and red-faced. I have to threaten her if we're going somewhere or I'll have to fix sweaty hair. She's like a girl possesed. Like someone were chasing her. That's how fast she runs! This was at my Mom's house. She makes me nervous 'cause one time she fell into the secretary (that cabinet in the pic behind her) and she has a permanent dent in her forehead. Nothing I can say will stop her so I just let her run! At least she's getting exercise. LOL! 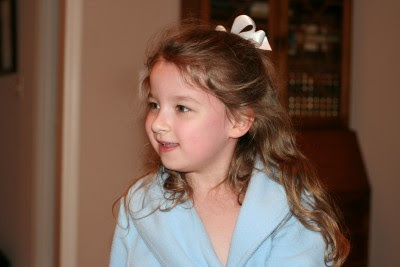 Gotta run...gotta get ready for church!
Posted by TracieClaiborne at 4:10 PM

I can not believe how long her hair is...so gorgeous! Love the waves too.
Page is a red faced sweaty player too. It's good for the soul!

Jonathan always gets upset during musical chairs.
I cringe when someone mentions playing it!
Love the pictures!