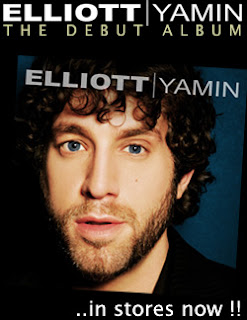 Do you remember Elliott from American Idol last season?
He is one of my favorite singers EVER.
Ever.
Ever.
Ever.
And I'm pretty picky when it comes to voices.

His debut album came out a couple of weeks ago.
It broke the record for the highest selling debut ever on an independent label.
Elliott's cd sold over 90,000 copies in it's first week!!
It's #3 on the Billboard charts right now.
Go Elliott!!
I'm going to pick up my copy this week at Walmart when I get groceries.

You can sample some songs and see his new video
here.
You can watch his Idol clips on YouTube.com.
This one is my favorite.

I'm so happy for him!!
Any other Elliott fans out there?
Posted by TracieClaiborne at 11:47 PM

I LOVE me some Elliott, Tracie! :) I gotta get his album, too! Hope you and your family are doing well! I might have some good news this week! ;) Hugs!!