Mike's Aunt Virginia used to say, "hi Mikey-Poo!!!" in this hilarious little voice. We used to say that all the time and laugh.

People ask me all the time what band my husband plays for. Along with being a co-owner of Creation Audio Labs, he's a full-time bass player. I think people expect me to say he plays with someone they've heard of but if he did - he'd have to be "on the road" and well, we just can't have that, now can we? I already only see him about 2 hours a night.

So I saw this cd in our bonus room last week and thought it would be nice to show you all his band. I say "his" band loosely. He just plays in it. Dave Nuding is the owner and leader. Mike has worked for him for many, many, many years. (That's Mike in the very front, at the bottom of the pic, to the right of the girl, for those of you who don't know him.) 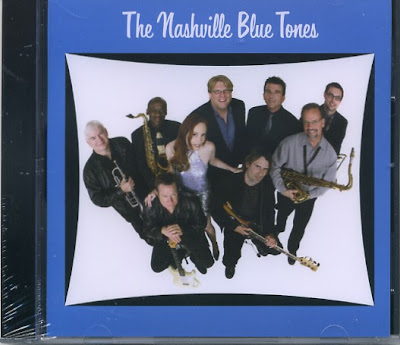 They mostly play at weddings in places like country clubs, nice hotels, etc. Sometimes they play a company party or even something horrible like a Democratic campaign party. heehee They have two bands working most weekends so they are pretty popular.

I'm thankful that Mike can do what he loves and stay in town. I think one of the things that makes him such a great husband is that he understands having a *passion.* He understands why I love scrapbooking because he loves music so much. He understand my enthusiasm for meeting Stacy Julian because he gets equally excited to meet some famous bass player at a music show. We are nerds together I guess. ha-ha!

So there it is. Just some stuff about Mikey-poo.

Posted by TracieClaiborne at 10:50 PM

That's a fun picture of Mikey-poo.
Bill calls him Mikey.
I will have to tell him to add the poo!
I should post a cd cover of Bill. You know, one of the ones with big curly hair!

So nice to see you back in blogger land! Love reading you! Isn't it so nice to have a hubby that loves you no matter WHAT?

wow, tracie.
i love what you wrote about mike understanding your passion because he has a passion as well. that is fabulous!