my husband is a hoot 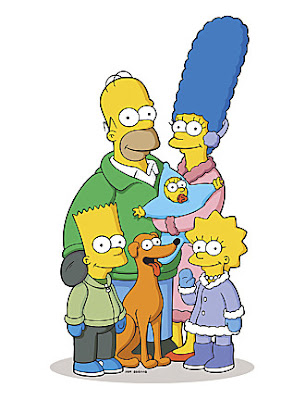 He has been waiting for the Simpsons movie.
Tonight was the night.
He took me out to dinner and a movie.

He was so funny and cute when it came on.
He was laughing so hard at every little thing.
I was sitting there thinking, "...and this is funny, how?"

The Simpsons bores me for the most part.
I mean, it's amusing but it ain't no Andy Griffith.
Know what I mean Vern?

I said to him before we left...
"This movie better be clean."
I normally do not watch PG-13 but it's the Simpsons - how bad could it be?

Of course there were a few parents who thought that was totally appropriate for their 4, 5 and 6 year olds.
I couldn't believe how many little kids were in there!
I think there were about 10 grown-ups in the whole place.
The rest were kids and teenagers (grrr...don't get me started).

So anyway....it was just okay but I got a kick out of seeing Mike laugh so hard.
He works so hard, he deserves a few moments of joy, even if it is from crude humor.
I've decided under that hunky, hard-working man, he's all boy.
Posted by TracieClaiborne at 10:02 PM

My almost 7 year old loves the commercials for this movie. He tells me about the commercials and trys to convince me that "it is not inappropriate for kids." Keep dreaming kid because it ain't happenin'. I don't even let him watch the show!
I am glad that you and your honey got a date night. Me and my lovie do not get nearly enough of those.

Boy humor is beyond me too. I just don't have the right genes.

I once watched an interview with the writers of the Simpsons and both of them said they don't write it for kids. It's not supposed to be a kids show. I've watched it just enough to know that much. :)

I do think it's funny when they have celebrity cameos.

"and I wish you didn't have the devil's curly hair"

I admit, that made me smirk. I love quick wit.

Be thankful he doesn't like South Park! That's a for sure NFC rating.

Tracie-got such a kick out of this post! Your blog is a real treat to read! I've enjoyed it!