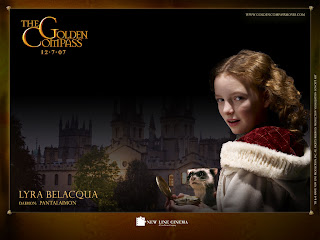 FYI: I was alerted to this by an e-mail but this blog post contains only facts I have found myself online.

There is a children's fantasy movie coming out December 7th, called The Golden Compass.
It is based on a trilogy of children's books by atheist, Phillip Pullman.

From what I've researched, the books subtly parallel the Fall in the Garden of Eden.
Fox News says, "The anti-religious themes get progressively stronger with each book in the trilogy; in the final installment, the characters succeed in killing a character called God..."
The book names the god Yahweh, Adonai and The Almighty, among other names.
The author says in an interview, "It's the story in the third chapter of the Book of Genesis, but here it's seen from another angle, through other eyes, this moment of revelation and sudden understanding, sudden self-consciousness, knowledge."

In one of the books, an ex-nun states that Christianity is "a very powerful and convincing mistake."
The author defended that statement by saying, "That's the character saying that, not me."

I've read many interviews online with the author. He references Biblical facts surprisingly well, for one who denies God's existence by saying, "If there is a God, he's never shown himself on Earth."
Then again, Satan knows scripture well. He taunted Christ with them.

You can verify these facts on snopes.com.
A current Fox News article is here.

There's a very disturbing section on the movie's website about how you can find your own true demon (re-worded as daemon, but pronounced the same). We all have one, according to the books.
Children will likely enjoy this bit of inane evilness, if allowed to view it.
They will most likely be led to the website via a McDonalds Happy Meal or other advertising.

We, as Christians, need to stop being passive about the forces of evil at work.
Satan is alive and well and he would like nothing better than to steal your seed (your child).
If he can take your child's mind and turn it against God, that is his greatest victory.
Let's spread the word about this movie and stand up for what's right.
Guard your children people.

But whoever is the reason for one of these little children who believe in Me to fall into sin, it would be better for him to have a large rock put around his neck and to be thrown into the sea. Matthew 18:6

Posted by TracieClaiborne at 9:25 PM

I saw this the other day. Another friend of mine passed it to me through an e-mail..thanks for posting it:)

Thank you for the heads up. I am so glad you took time to make us aware. I told a few friends too.

wow. thanks for sharing this with me. I haven't heard anything about it.

thanks for sharing this.
Bill told me about it but i didn't realize it was aimed at our children.
and oh...i miss you!