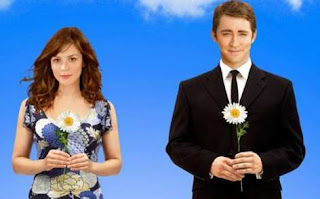 Finally, there is a t.v. show worth watching.
It's not overtly sexual, although there is a romance.
It's not like anything you've ever seen before.
It's called....Pushing Daisies.

They did say one word in the premier that I think could have been left out but for the most part, it's clean. I even let Caroline watch it. She loves it.

Have you seen it!!!?
It's about a boy named Ned and a girl named Chuck.
They are simply delightful.

I absolutely, totally, completely love it.

I just watched last week's show and last night's show tonight.
You can see all 3 episodes on abc.com.
Well worth the time.

It reminds me more of a movie than a t.v. show.
It's somewhere between Nanny McPhee and Lemony Snickets.

Here's an extended preview that pretty much tells the story. Watch it if you have a sec.

Posted by TracieClaiborne at 10:00 PM

I've been watching this one too! It's so strange, and yet, interesting, lol.