a) Did anyone happen to catch Fox's Don't Forget The Lyrics last night? Did you see that kooky blonde girl from White House, TN? She was a little off her rocker, huh? The funny thing is....she's my cousin! ha! Yeah...we gots us some crazies on my Mama's side.

b) I have been so cold today that nothing would warm me. I have the heat on 72 right now upstairs. I guess it could be worse. In Russia today, the temp is 55 degrees below 0! Dude. That's just wrong.

c) Does anyone besides me not care at all about Britney Spears? I don't even know what the latest crazy thing she did was but I keep hearing everyone talk about it. I don't care enough to pay attention. Ugh. I get so sick of the media.

d) Are you sticking to your New Year's resolutions? I just took a vitamin for the first time in 2008. Does that count as me trying to be healthier? heehee

e) My sister's birthday is Tuesday. She'll be 42. She's trying to slap me thru Cyberspace right now if she's reading this. ha-ha! You can't catch me!

f) Do you ever look at your kid and wish they were sweeter like when they were a baby? My kid is so mean lately! It's getting hard for me to think she's adorable. Sometimes I think I'm the only one with a mean kid. Maybe stubborn is a better word.

g) Do you ever have so much stuff in your head that needs to be done that you just want to run away and not speak to anyone for a few weeks? That's how I feel right now. My new job responsibilities are overwhelming me a little. The Pastors had no assistant for so long that I am trying to pick up all the pieces and it's quite a task. I am thankful for my job and I love every minute for the most part, it just overwhelms me every once in a while. At least I'm not bored! LOL

h) Tonight I watched the Andy where Floyd pretended to be rich and impress a women he met through a letter-writing dating service. I wonder if I'm the only person ever who never gets tired of watching Andy. Is there some show you never get tired of?

i) I scrapped this week even though I haven't felt good. I need to start a new one now. I've decided I'm really over the whole "use-a-cute-picture-put-a-cute-title-and-throw-a-bunch-of-embellishments-on-it" layout. I want to get a chunk of my pictures scrapped! Like a BIG chunk. My goal right now is to scrap birthday #7 and get all Girl Scouts pics up to date. I have a TON of those pics. Here's one I did this week about our visit to the American Girl Store in Atlanta. So fun. I could have put a bunch of journaling but the pics speak for themselves. Plus, there's not much to say other than we went, we shopped...she loved it. 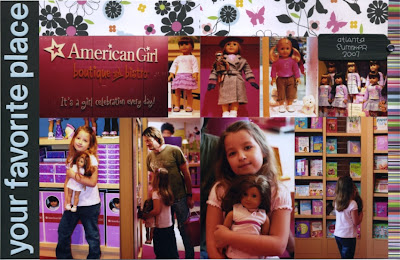 j) Tomorrow is Caroline's best friend's sister's birthday party. Did ya get that? She's four and very cute. I love that little munchkin. Gotta get a gift first thing in the mornin'.

Blog ya later gator!
Posted by TracieClaiborne at 12:49 AM

just giving you some support: You are NOT the only one with a mean, stubborn kid that frustrates you. I have 2 that do that very well in my house. Sometimes I think that Zachary is the only one that I've been a sucessful parent with. UGH...'cause Brandon (who's turning 13 in February) is just plain mean all the time and Kaitlyn is just stubborn and whiney. SO - you're not alone. Maybe they'll be great teenagers? Maybe it'll be out of their systems by the time everyone else's kids turn mean, too? Let's hope!

I refuse to comment about anything until WE SEE YOUR HAIR!

Said with love and a smile!

I think about it all the time, Tracie. Emma is just five (and a half-and she'll REMIND you of it) and hoo-boy it has started already.

Tracie, I love this layout. Loved it when I first saw it and didn't comment.

I'm sorry I'm such a lazy commenter. :( It's really not laziness as much as trying to get through my list of blogs quickly so my family doesn't starve or have to go to work naked...*LOL*...(well, ok, it's a little bit laziness)

Anyway, I think you are super talented and your sweet and bold faith inspires me and makes me smile. And I will try and be a better commenter! K?