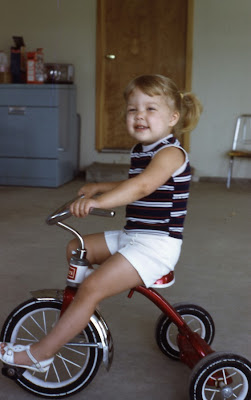 I just read my friend Margaret's blog.
Her little boy hurt his arm and had to go to the ER.

It reminded me of a time when I was about Caroline's age (8).
(The picture above is me much younger, more like 3, but a handfull, as you can see.)

I remember very specifically my Father telling me not to run thru the house.
I would run and swing my arms out like a crazy person and he said I would hurt myself.

Just moments later, I did just that.
I swung my arm out of the socket or something similar and it began to hurt like the dickens.
When my parents asked me what I did, I had this great fear of telling the truth.
I could hear his voice in my head telling me not to run and I was afraid to admit it.

So I told a bold-faced lie and said that I was playing on the floor and I STEPPED on my arm with my leg.
Mama and Daddy believed me and took me straight to the ER.
They had me relay to the nurse EXACTLY what happened. That was hard since it was made-up!
The nurse looked at me like I was a bit off but buddy, I stuck with that story and didn't give it up.
They kept questioning me over and over and the story kept changing but the main gist stayed the same.
In the floor. Playing. Stepped on arm. What's not to understand?

Looking back, my parents probably had quite a giggle and knew that I was lying.
I only know that now because I most always know when my own child is lying.
Which unfortunately is more often than I would wish!
I guess she gets it honestly, eh? Boy, I was a stinker.
Posted by TracieClaiborne at 1:14 AM

I love the story of you stepping on your own arm, lol, that is too funny!!!! I had to leave a comment about what Caroline wrote on her Hello Kitty memo pad, that is soooo sweet, I would have cried too. :)

I love this photo and the story! You better scrap that!
Do you have a pic of Caroline on her tricycle too?