Sorry I haven't posted in a while.
There have been some big changes in the Claiborne household.
Trying to get in the groove of our new schedule. 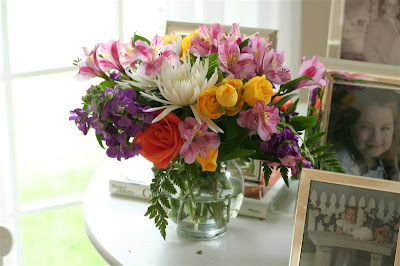 First of all...about a month ago, I decided to resign my position at COLC. Tough decision 'cause I love those people.
(See the pretty flowers my co-workers gave me?)
As you may know, I was working between 20-30 hours a week (mostly at home), as assistant to my Pastors.
Well, I finally decided I'm not Supermom after all and after a few super stressful weeks in June, I decided to quit.
Mike and I made the decision as a family, that I shouldn't work as much anymore.
So actually I quit and then Pastor Betsy and I came up with a few things I can work on at night.
Just. A. Few. Nothing that will pressure me or distract from our homeschooling.
Basically we got behind on homeschooling last year and things just were disorganized and bad.
I've never let that happen before and God willing, I never will again!
Homeschooling is like a train, you have to keep it on track or you'll never get it going right again.
Ours got WAY off track. We didn't finish 3rd grade until June 29th!

So last week was my last week to work full-time and this week was our first week of school.
It is going great! I've had the phone turned off during the day and I love the tranquility.
Caroline is enjoying this year's curriculum. It's very intense. Double the work.
Seriously. Double.
Last year, she did one page of Language, this year is two. Same with other subjects.
She's acclimating well though. We even did a fun art project today. I need to take a picture of it.

So last week I told on Facebook about getting some deals at Michaels.
I haven't had time to blog about it because I was so busy wrapping up my job.
I ended up going to Michaels four times last week! Here's why, in case you're interested.
I went in and saw the new $1 Fall stamps and checked out the clearance.
I got these super cute stamps and these MAMBI chipboard mini-books I'd been eyeing.
I bought one at full price months ago and ended up getting like 8 more on clearance for $1.19 each! 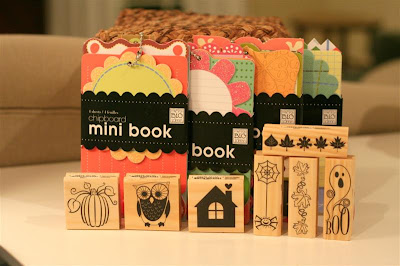 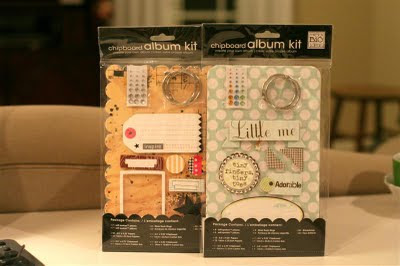 So I had a talk with the manager and found out that after things are marked down to their lowest price, they throw them away!!
I just stood there speechless! I can't even bear the thought of it.
I went back a couple of days ago and sure enough, all the little chipboard mini's were gone. Ugh.
I spent about $30 at Michaels (3 trips) but I got about $150 worth of stuff! Love it!

Here's Caroline's "first day of school" picture. It isn't thrilling me. I might fake a reshoot. 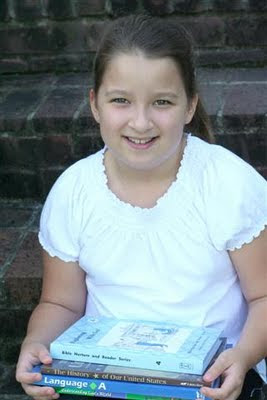 We're doing a FABULOUS Bible curriculum this year. I love, love, love it. It's by Rod & Staff.
This girl will be a walking, talking Bible by year's end.

Well that's about it!
Just trying to get my house organized, keep school on track and be a better wife and mother.
Hoping to scrapbook a bunch this weekend. I've been planning my Smoky Mtns. album.
I'm going to print about 100 pics tomorrow for it.

Blog ya later!
Posted by TracieClaiborne at 1:15 AM

I'm jealous of your goodies! I'm on a spending freeze right now! I can really see Mike in that picture of Caroline. I've never really seen it before! So glad things are going well with school.

Great bargains. I just love it when that happens. It is crazy that they throw stuff away. That might dumpster diving worth it!!

You have my admiration with homeschooling! I don't know how you did it while working too.