Here's a little mini I made recently for a class at The Scrap Room.
When I make an entire album in a class, I have to keep it super simple and easy to replicate.
I sketch out how each page will look, making it easy to follow and complete in a 2-hour class.

I scored a super deal on these Basic Grey chipboard sets so I gave one to each student and picked out some papers to coordinate: 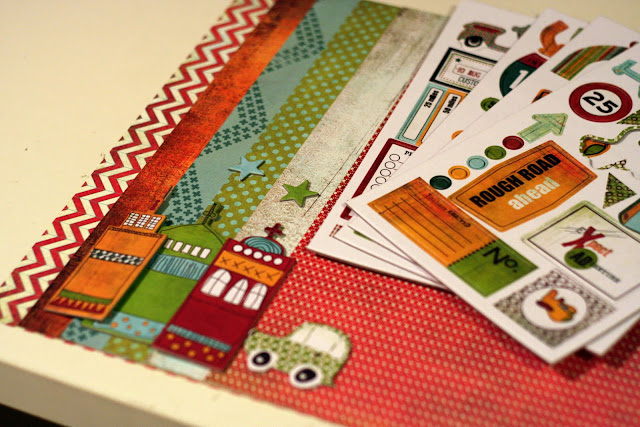 I didn't stick to just Basic Grey paper but I used some from their various lines because the colors just matched so well!
We used a total of 7 patterns and I cut each of them into 2" strips so that gave us 14 strips.
That meant we could have 14 pictures, plus one more for an end page so 15. Clear as mud, right?

I wanted to make this an album that would work for either a 4x6 horizontal or vertical photo so I did a 6x6.
Each page was formatted with a 2" strip that could either go a the top or on the side, depending on the photo.
My idea was for the students to randomly pick out chipboard that went with their photos but most of them decided to make theirs exactly like mine.
Which is fine! I just want them to leave happy!

So here's how it turned out! (The images are clearer when you click on each one.)

For the cover, I mixed some patterns and then made a scene with a bit of chipboard: 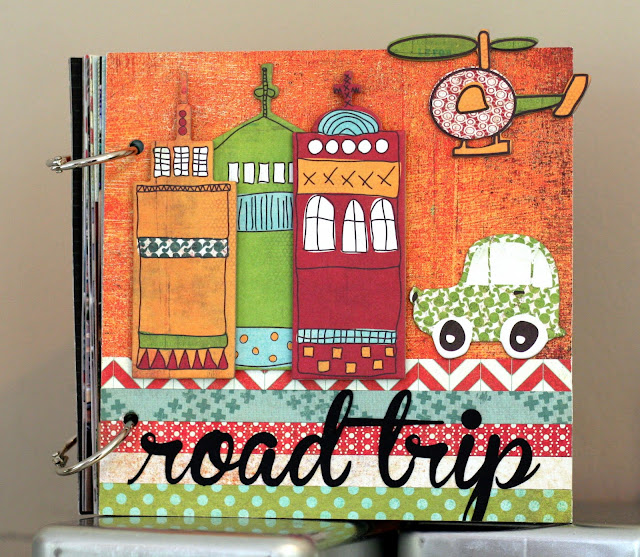 It's busy but I love how it turned out! I cut the title from my Cameo and was able to cut the strips of paper so it fit perfectly.

Here are the inside pages! 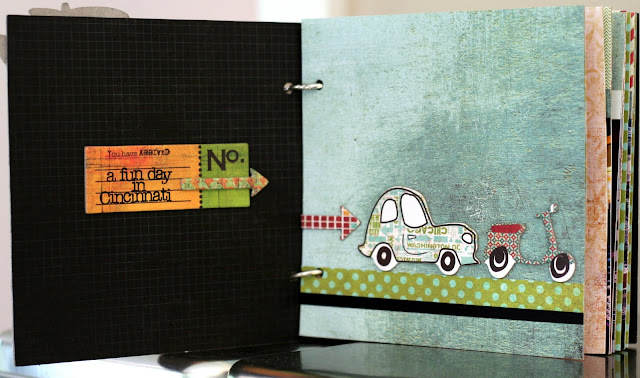 I used a new tiny clear alphabet stamp set on the little tag on the left - from Stampendous. Love it! 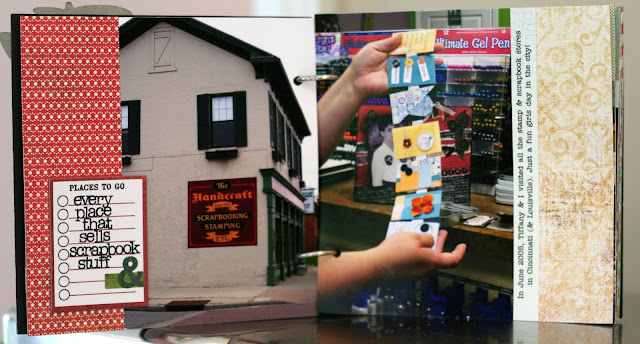 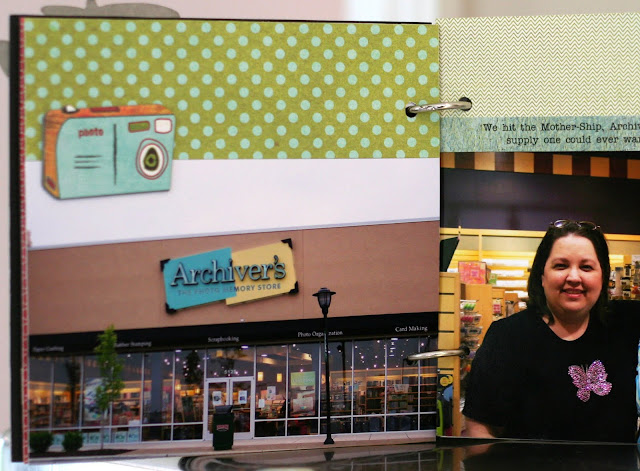 I cropped the right hand side of this spread out because my friend was in it and I wasn't sure she'd like her picture. 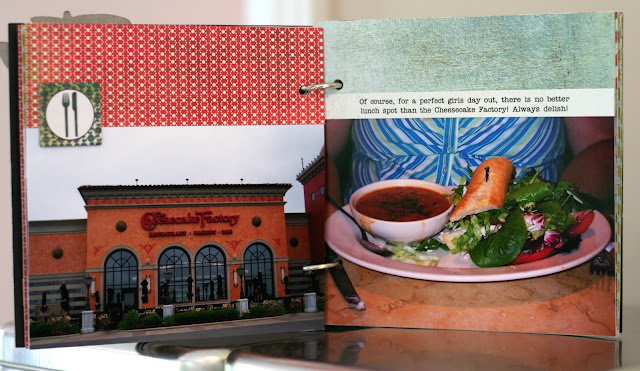 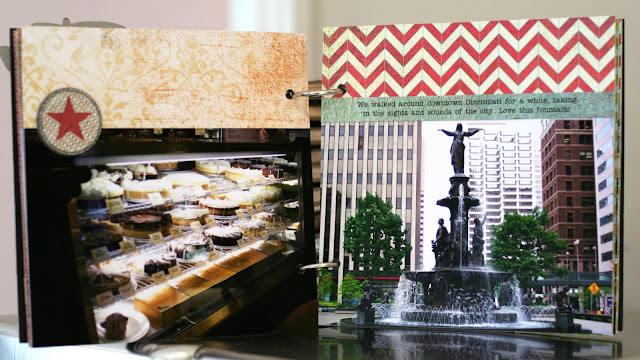 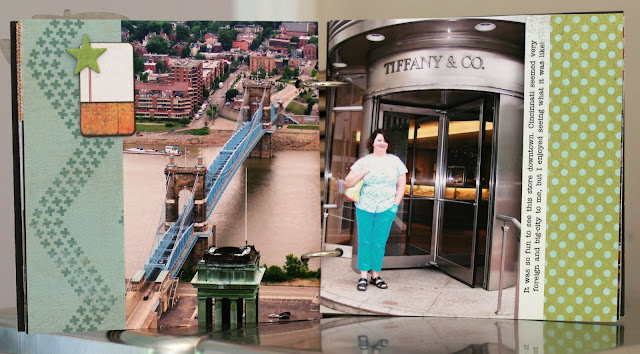 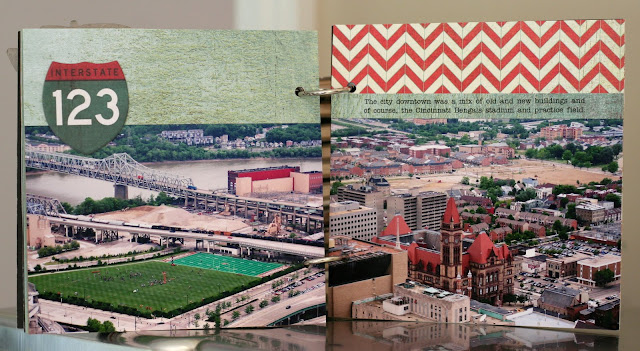 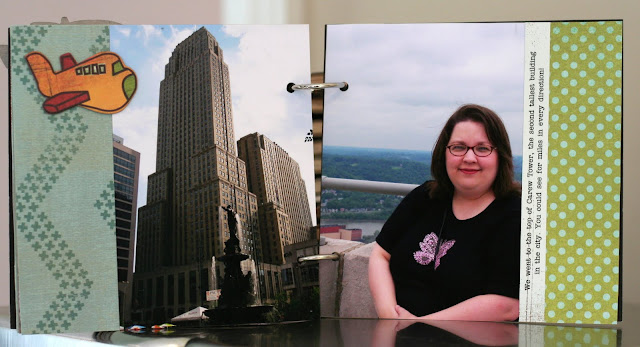 Caroline said, "Mama! Where did you get those glasses?" Yep. I hate them. Can't believe I wore those. 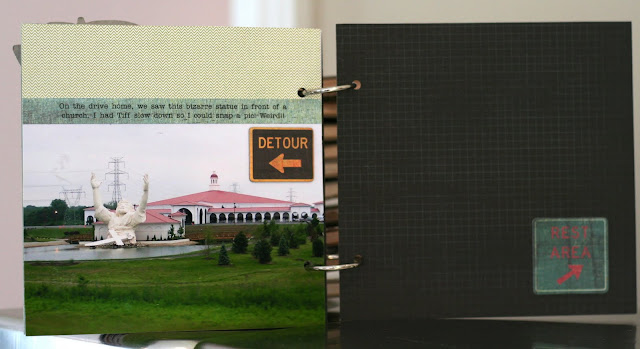 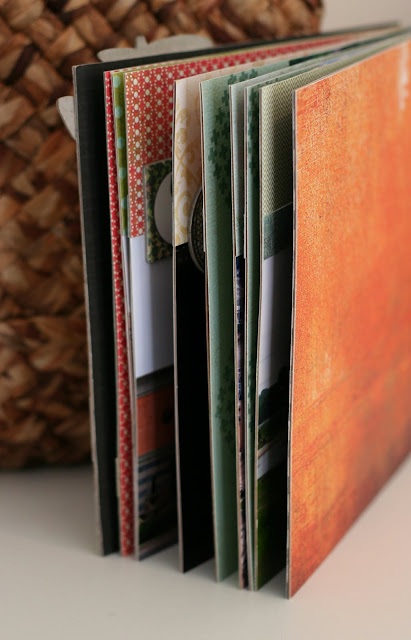 We used cereal boxes for chipboard to make the covers (front and back). We started with a base of 6x6 cereal box and then covered each side with paper. The papers I used were good and thick so that made a really strong set of covers.
For each page, we just put paper back to back and with the photos, the pages ended up thick enough to feel sturdy. Sometimes I add another layer in and will put kraft cardstock in between each layer of patterned paper but I didn't do it here because the papers were already thick.
I loves me some thick patterned paper!
Tomorrow I'll show you a bit about my process in making the cover and how I ended up going in a completely different direction than I started!
Stay crafty my friends!﻿
﻿
Posted by TracieClaiborne at 12:36 AM

I LOVE this BG line. The entire mini book is fabulous.

You asked about the skeleton on my invites. Its from the Echo Park Chillingsworth Manor line. There is a sticker in the set and if you have a Silhouette its one of the print and cut files.

I loved the class u taught the mini album.
Keep smiling.
Hope you feel better.
Tracey

Love it! Such a fun color and the touches of black really pop.

This is AWESOME! I love it! Looks like a super fun trip you took, too! :)

I love your album, Tracie! The colors are amazing!

I love this mini-adorable! Perfect line to use for this!
And how fun to see my city in your mini-it's neat to see it from a visitor's eyes. :)
BTW-that weird statue was struck by lightening last year and burned down(everyone in Cincy called it the Big Butter Jesus, which is awful, but that's what it looked like). They rebuilt it this summer out of metal (I think).

Cute mini for a class. I can relate to what you are saying about making the album simple for a class because I have taught many classes.

I love your mini. It turned out perfect

Tracie! This is the cutest book! I am so so loving your cover! It's a great book. I love the balance of photos to product. Very nice work!!