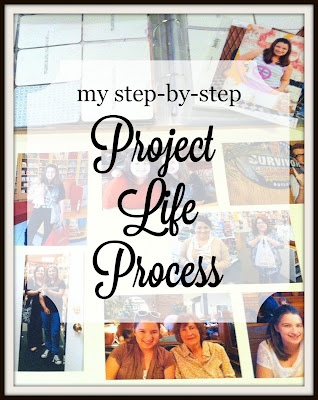 I almost named this post "a new Project Life spread + sorting and organizing 300 pictures + my process thought out + my plans for catching up" but I thought that might be a bit much.

I am on a roll this week. I am catching up on my Project Life monthly 2013 album.
So far this week, in three days, I've finished May, June, July and started August!!
My plan is to be finished with 2013 by this weekend. I am pretty sure I can do it!
When I make up my mind to do something, no matter how large the project, I usually accomplish it once I'm motivated.

Last month, I caught a "300 prints for $30 shipped" sale at Snapfish and agonizingly went through all my photos from 2013 and printed the ones I knew I wanted to use in Project Life. I grabbed pics from my camera, my phone, Mike's phone and Caroline's devices. That was a BIG job. Huge!

The thought of having to sort them all by month was daunting so I put it off a few weeks.
I sat down Sunday and with my laptop and Picasa open on my desk, I started searching for the pics in my hand to find the date.
After about three hours...I had them all sorted. I listened to three of our shows we have taped but not aired while I sorted.

After sorting the pictures into monthly piles, I went to Facebook and wrote down everything we did memorable in each month. 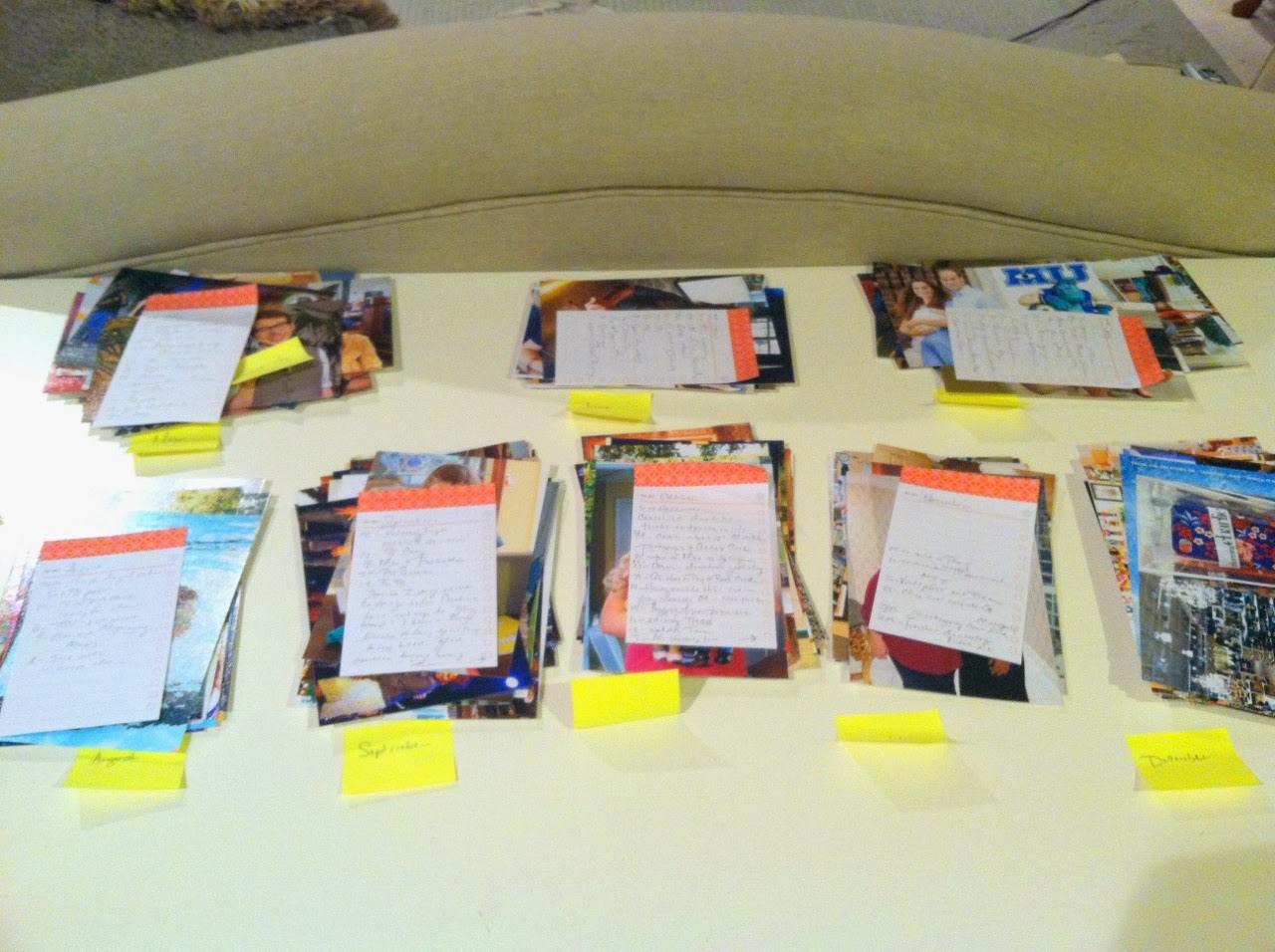 Then I put the list on top of each month's stack of photos. I used the photo envelopes to hold them and the list sticking up to separate them. 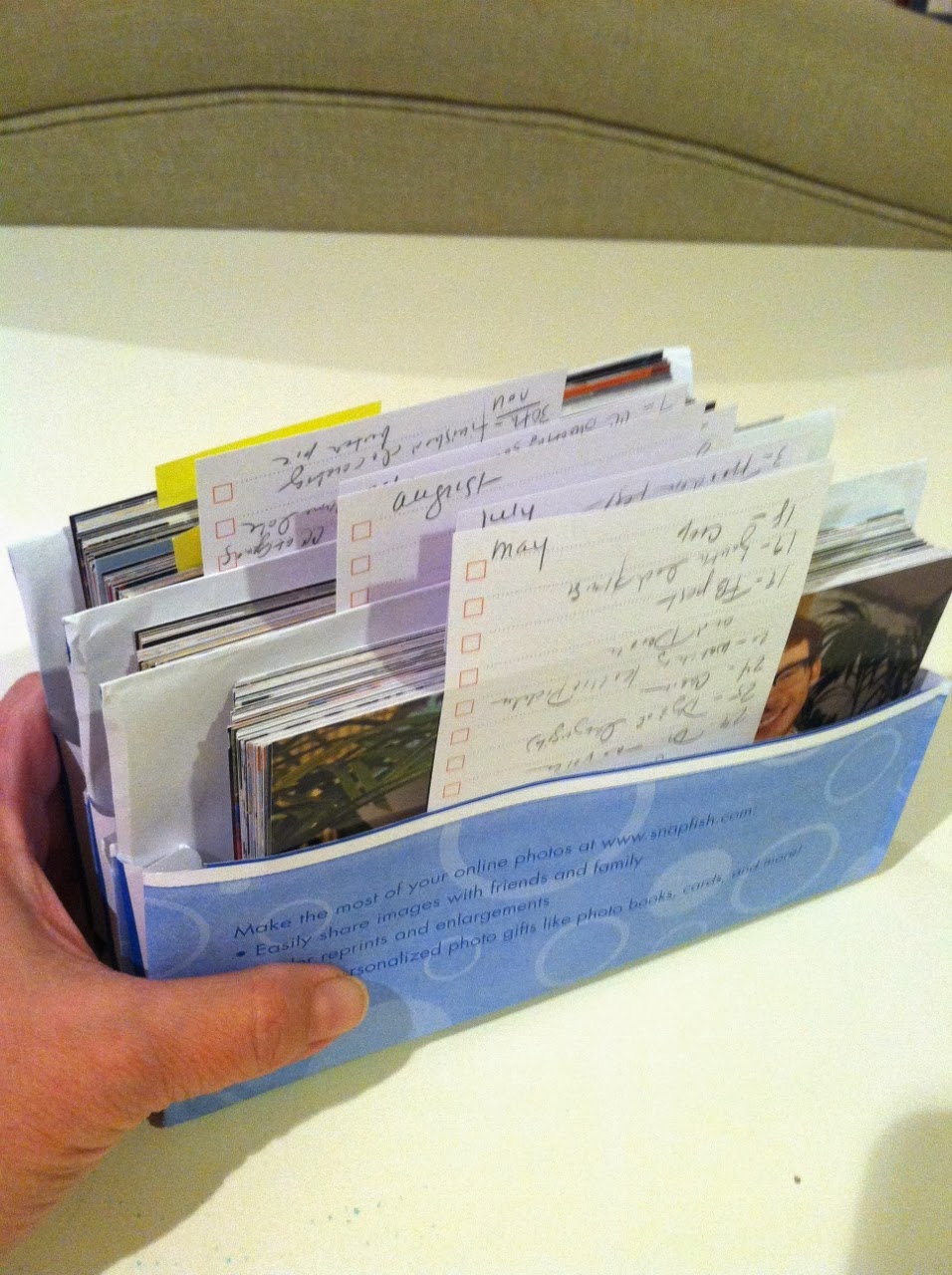 Once I had all that done...I opened my album to the last layout (April 2013) and grabbed my stack of May pics and the list from Facebook. 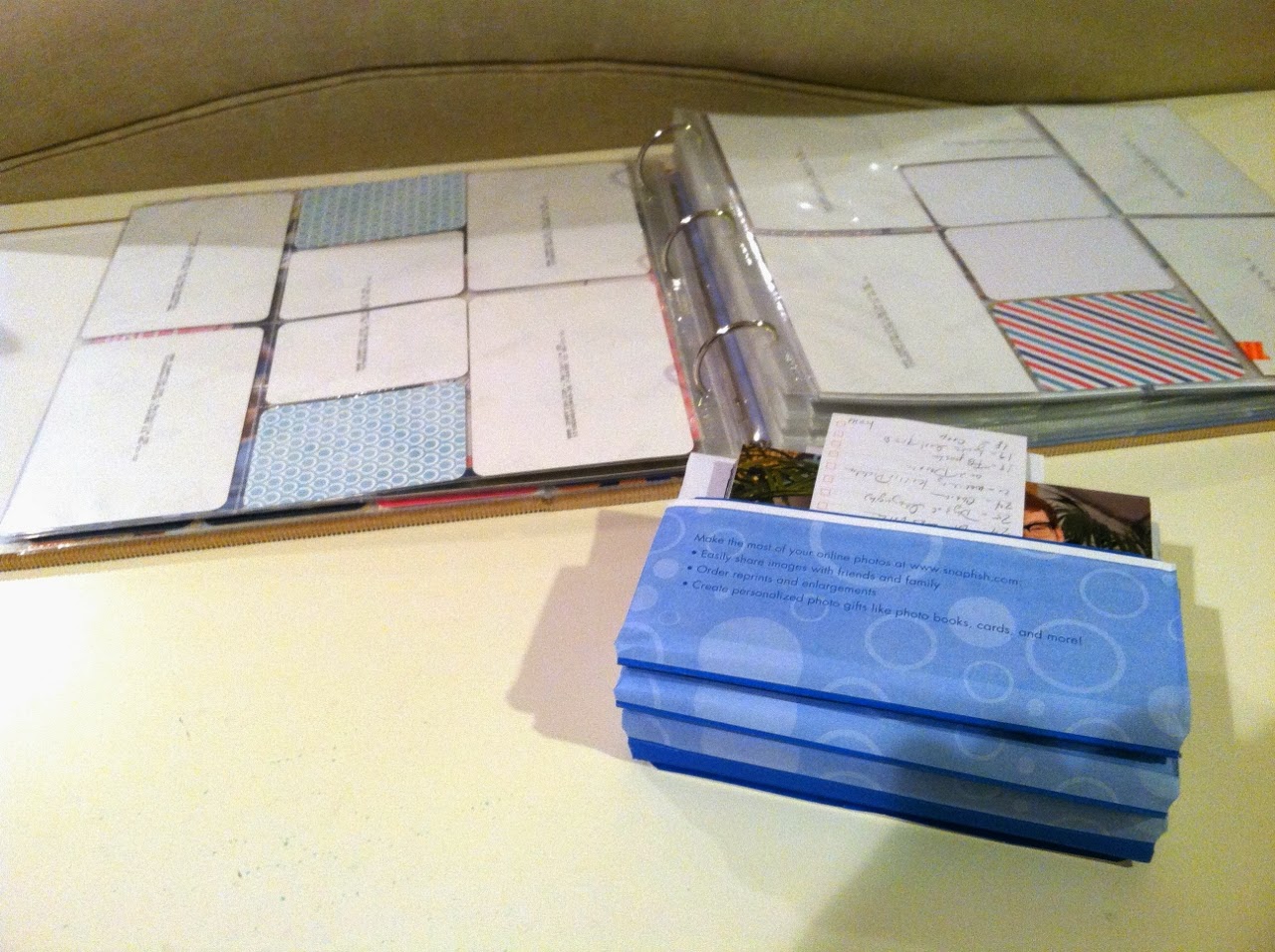 As you can see, the layout on the left used the vertical page protector that I don't like so I determined this would be the last month for that!
But that's something you just have to deal with in Project Life if you switch up sizes. Thankfully I had vertical pics that would work.

I started laying out my pictures, knowing I wanted to transition to Design A as often as possible.
(In case you missed our Project Life podcasts, I don't like the vertical design because the photos slip out too easily.)
So I laid everything on my desk to start... 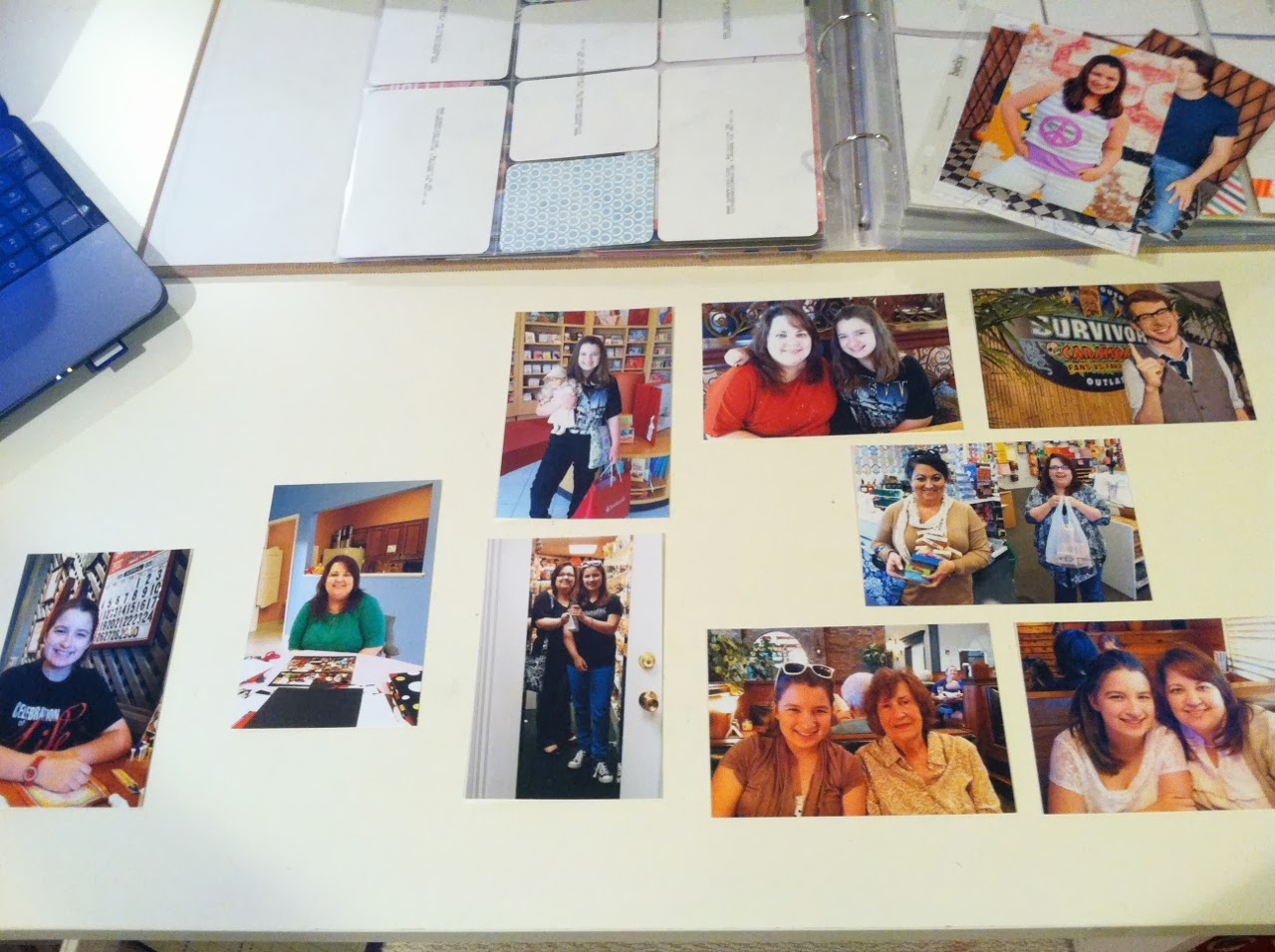 I always keep the top left spot for my monthly title.
I didn't like that I had two similar pictures of Caroline and me but there was a story for each so I used them.
I pulled my album closer to me and laid the pics right on top of the protector. 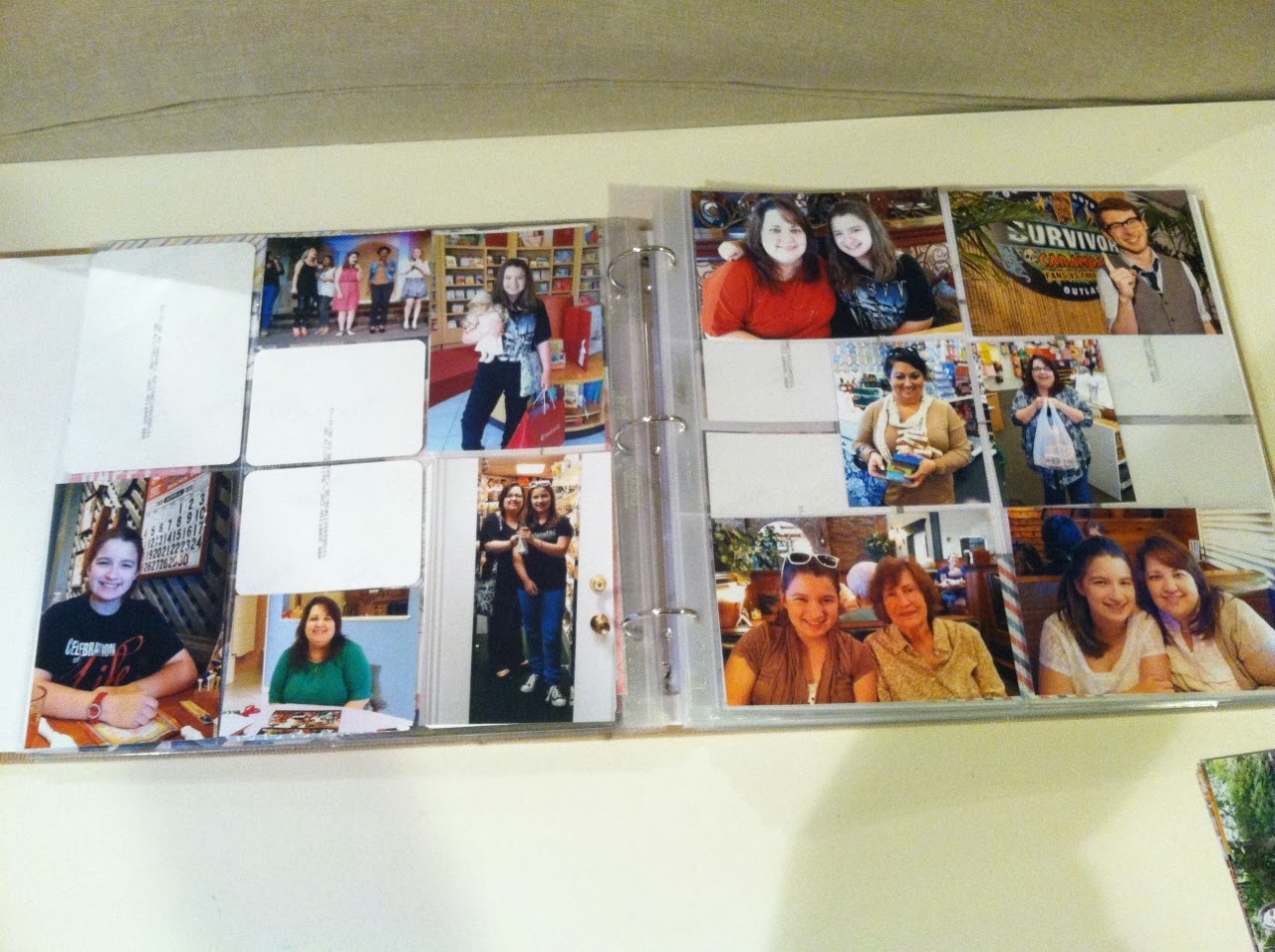 This is always the easy part to me - laying out the pictures. I can always do it without any real effort.

After this point, I looked for a 4x6 card (for my title) that featured all or some of the colors in my photos.
I realized doing this spread that I really start my design of colors and PL cards with the 4x6 card title card.
I've also decided that for now, I'm not going to color-organize my 4x6 cards because I like seeing the variety.
I'm inspired by the mix of designs when I'm looking for a jumping off point vs. filling in with color with the 3x4's.
I hope that makes sense! 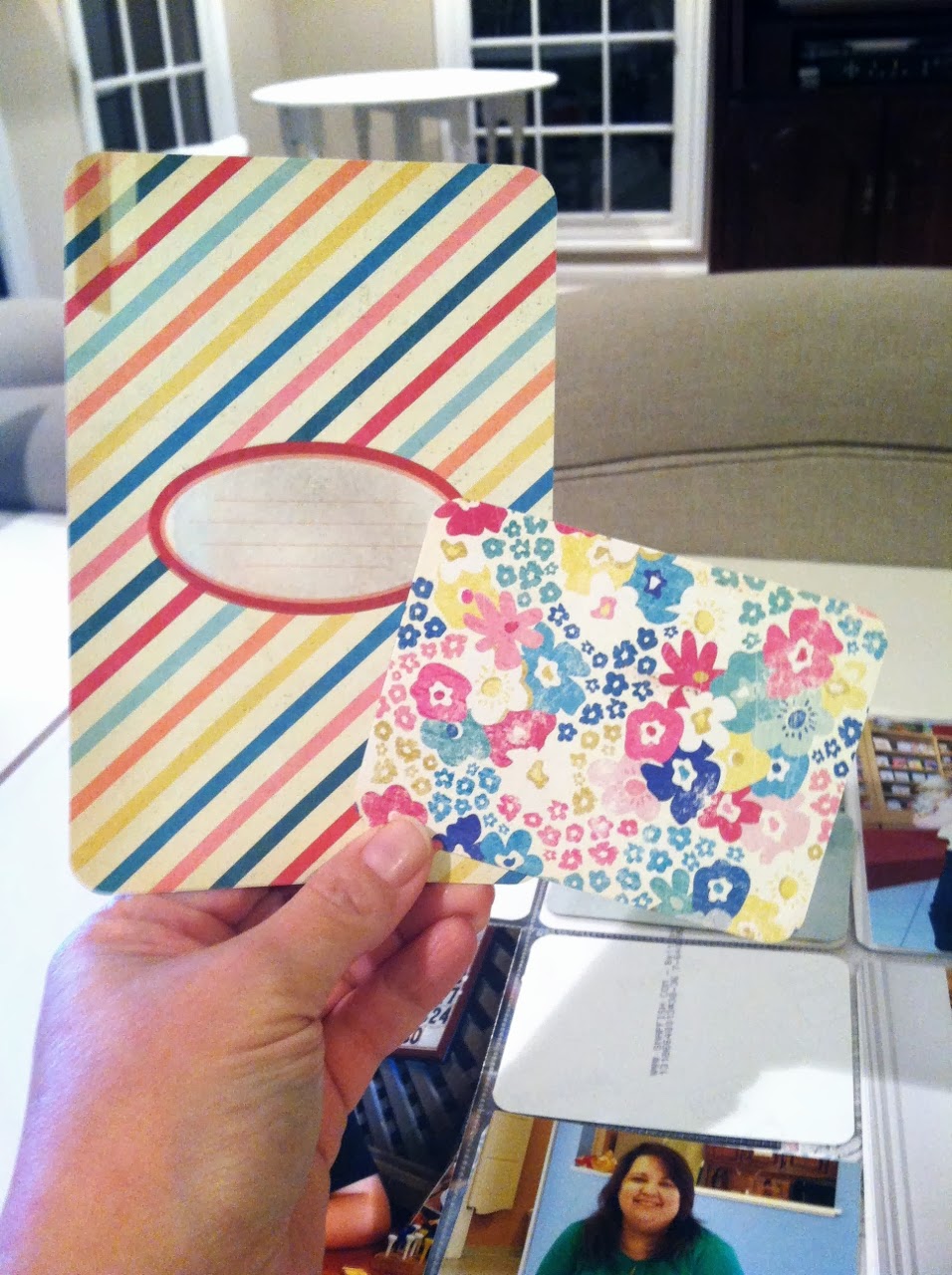 I found this striped card and a floral that I ended up not using because it was too white and the 4x6 was very cream.
I liked the 4x6 because that small oval was perfect for my short title...May.

I happened to have gotten in a Two Peas order that day so laying on my desk was a new Simple Stories sticker letter sheet.
Lo and behold the blue was exactly the same so I quickly mounted the title and found a little strip from another sheet to go under it. 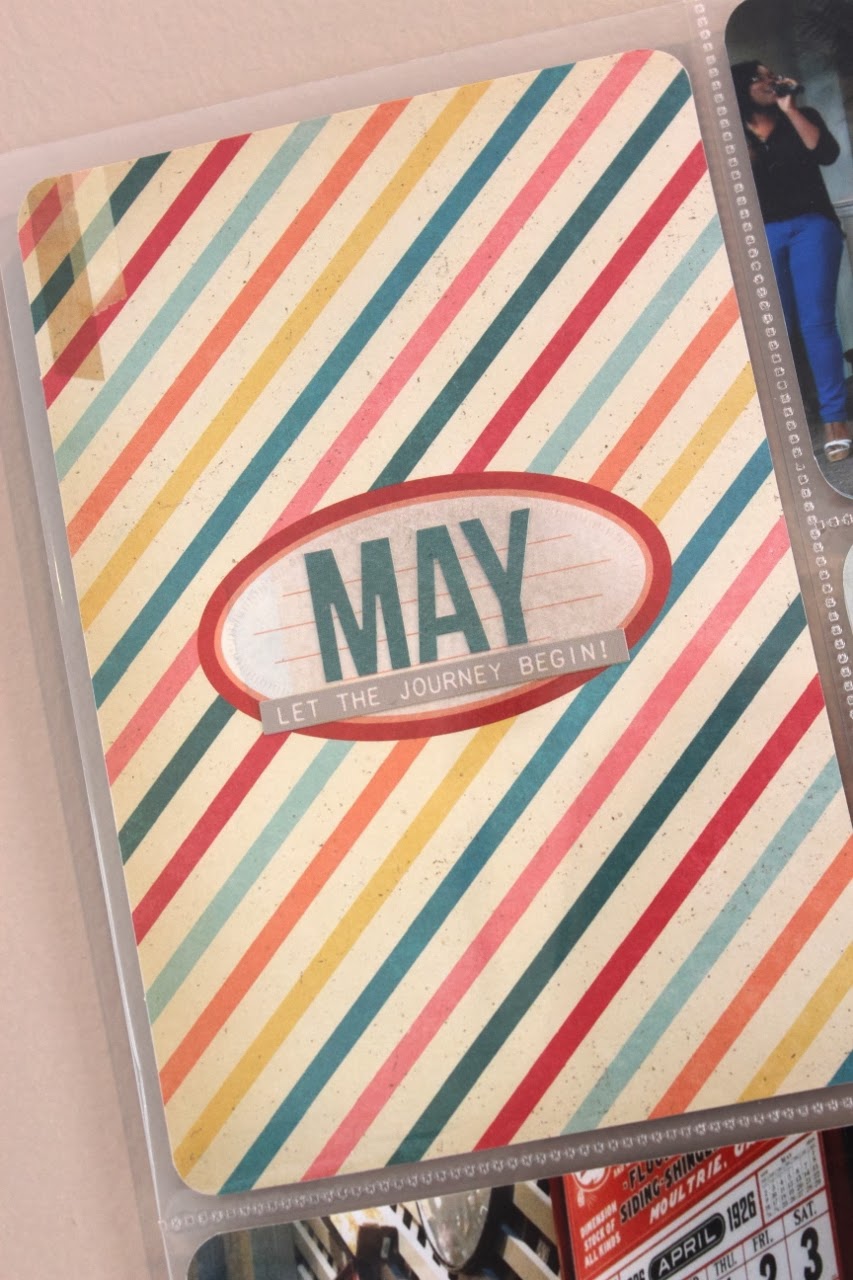 Once I found my 4x6 title card, I pulled 3x4 cards to coordinate. I am usually drawn to a multi-colored 4x6 card.

After finding some 3x4's, I wrote my journaling on post-it's and thought about what I wanted to say where. 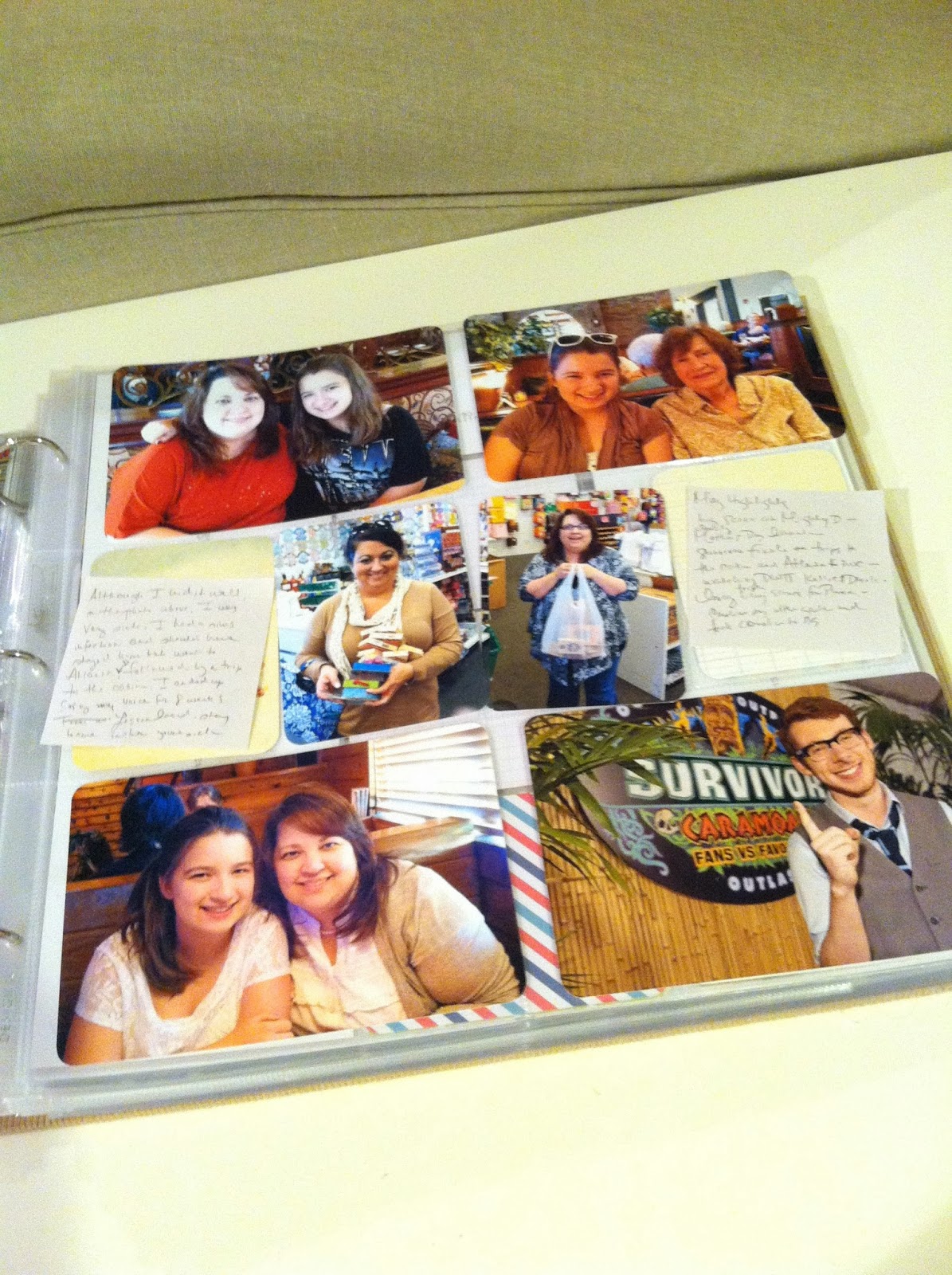 Then I went through the process of rounding corners and printing my journaling onto the cards.
All of that went pretty quickly but I spent well over an hour looking for embellishments. I enjoyed it but it always takes me a while.
Funny too because I don't feel the need to embellish every photo! I like having a lot of photos plain so they really stand out on their own.

So here's my finished spread (click to see full-screen).... 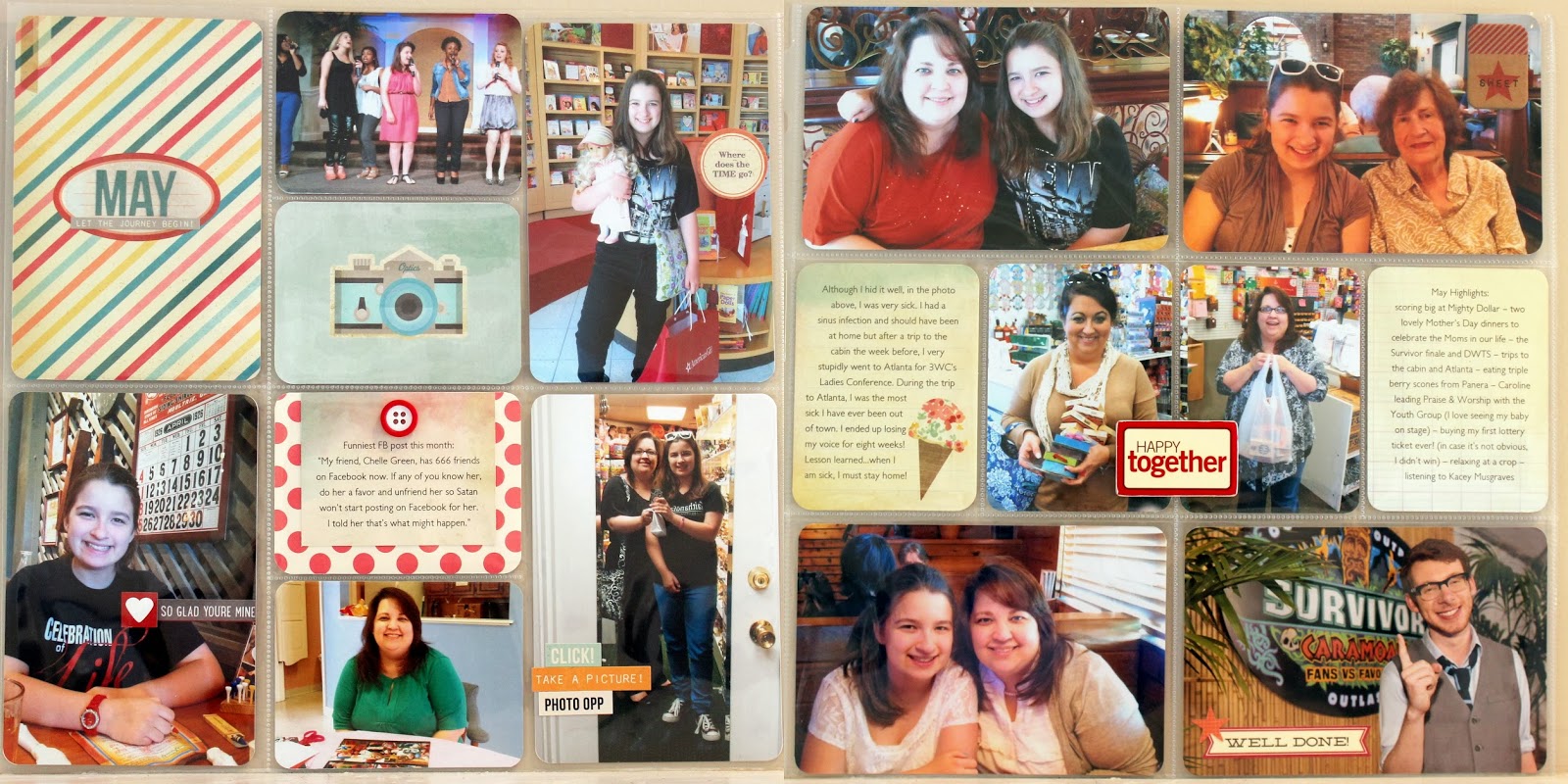 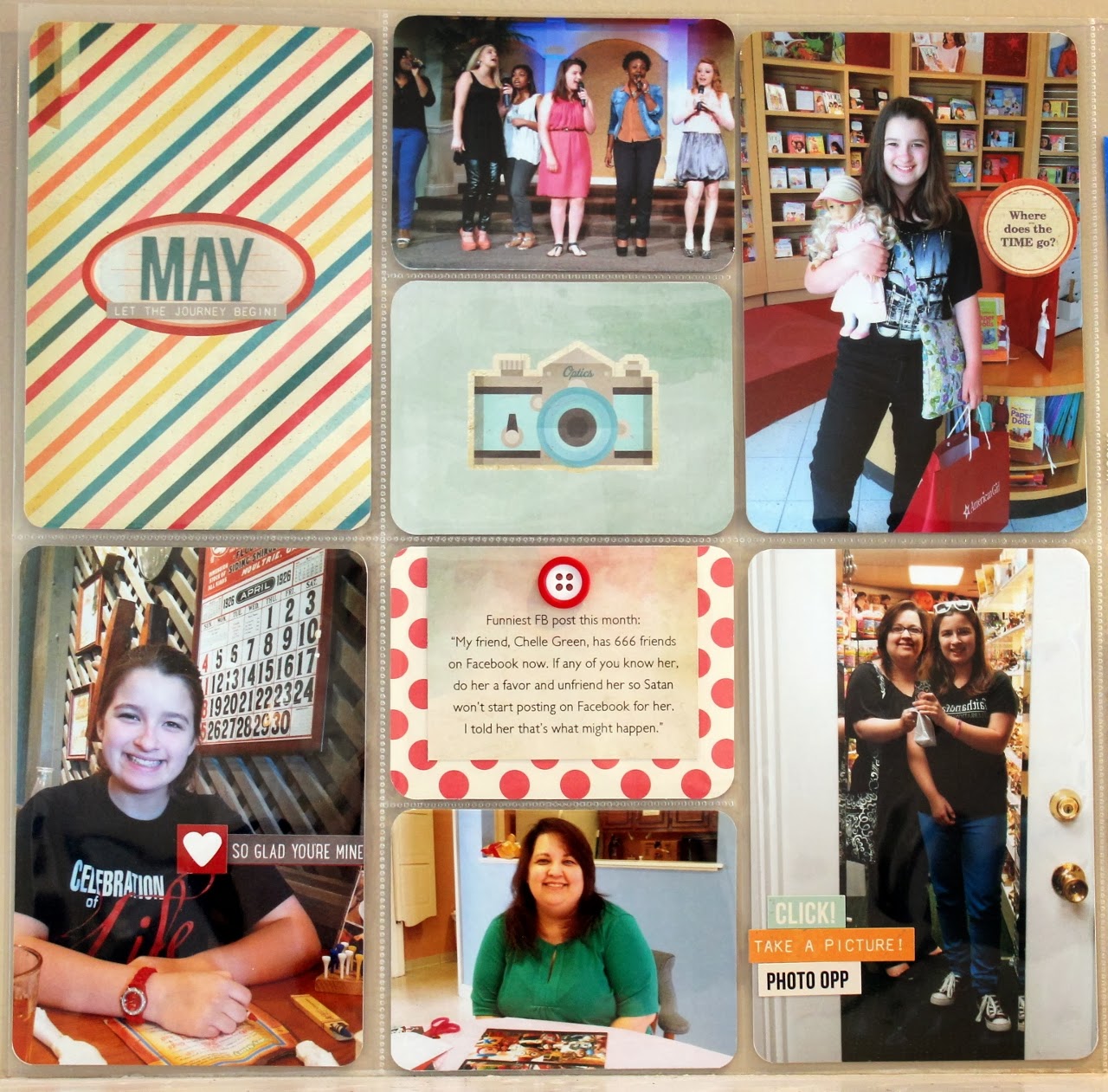 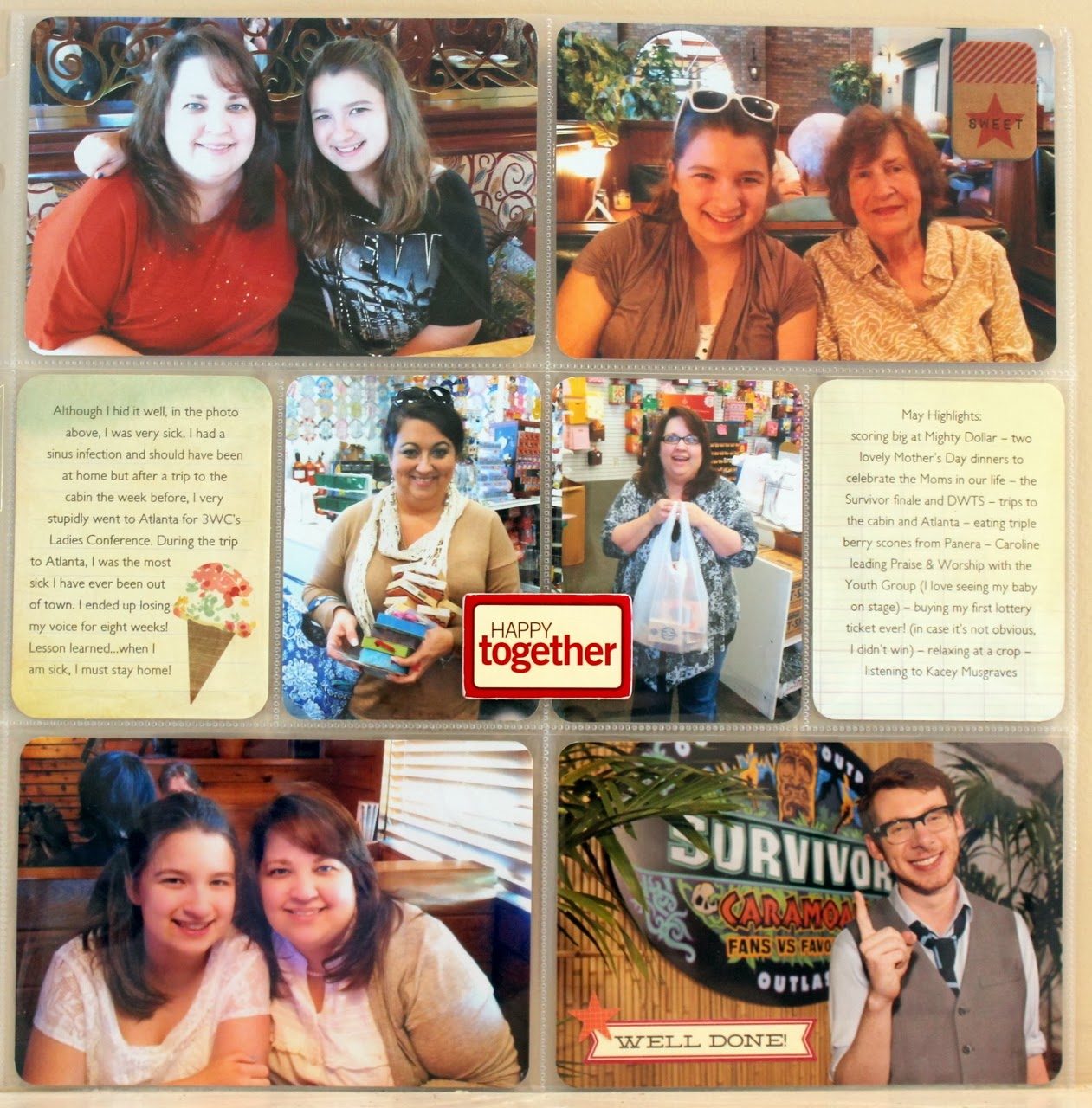 There are always obvious themes to a month and this one was Mother's Day and we traveled a lot and I was very sick.
I made sure to include the story of me losing my voice for 8 weeks...I look near death in the top picture above left for a reason! 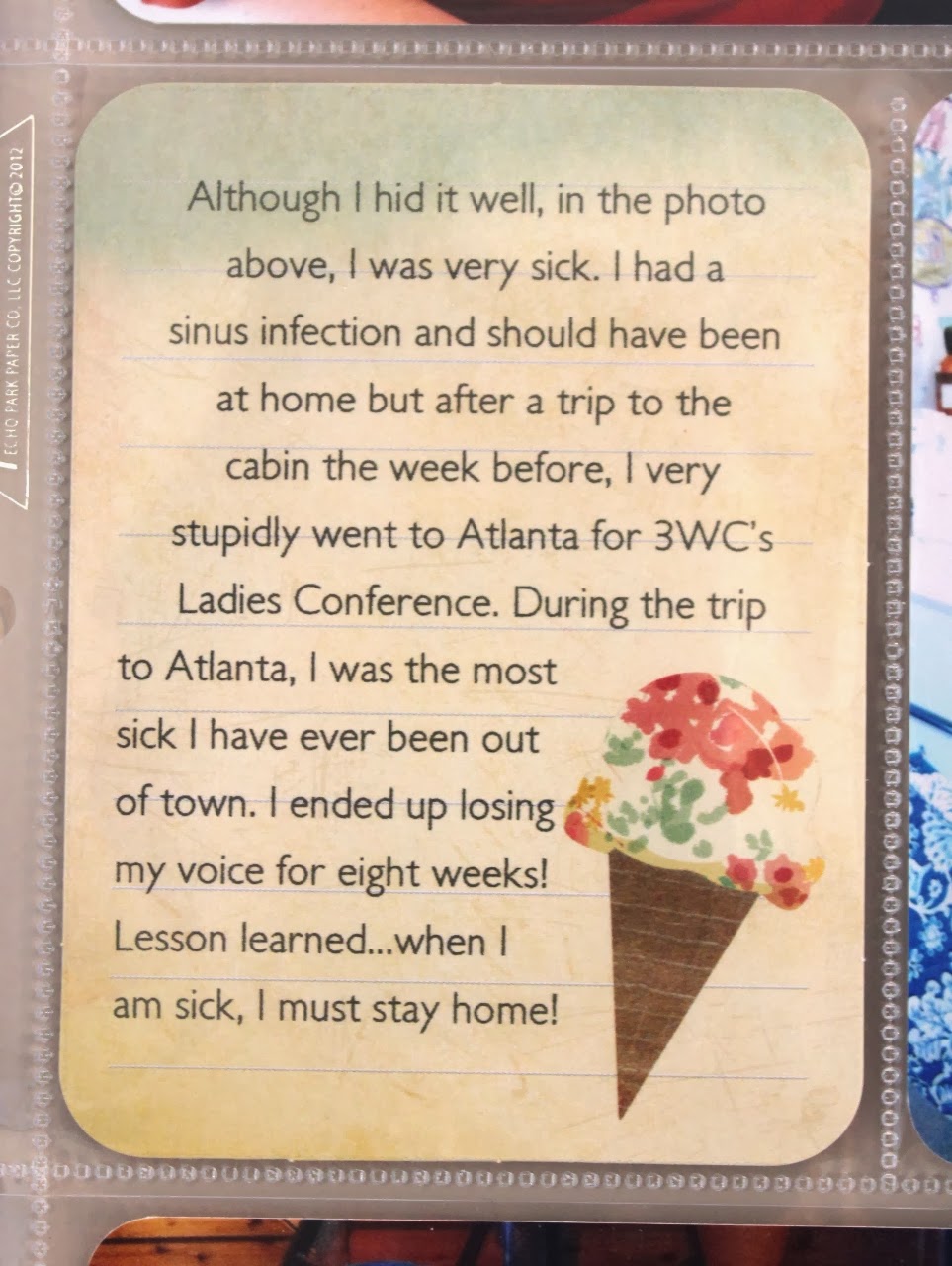 Side note: I had never before printed on a card with lines that I didn't put my journaling straight on the lines but this story had to be told and the lines on this card are very faint in real life. So I went against the grain of my perfectionism and just printed it on there, over the lines. It hasn't bothered me so far!

One thing I noticed as I went through my Facebook posts is that I had said quite a few funny things I wanted to remember. Caroline too.
So on each list, I made notes of the FB posts I wanted to copy directly for a spread. This was one of them. 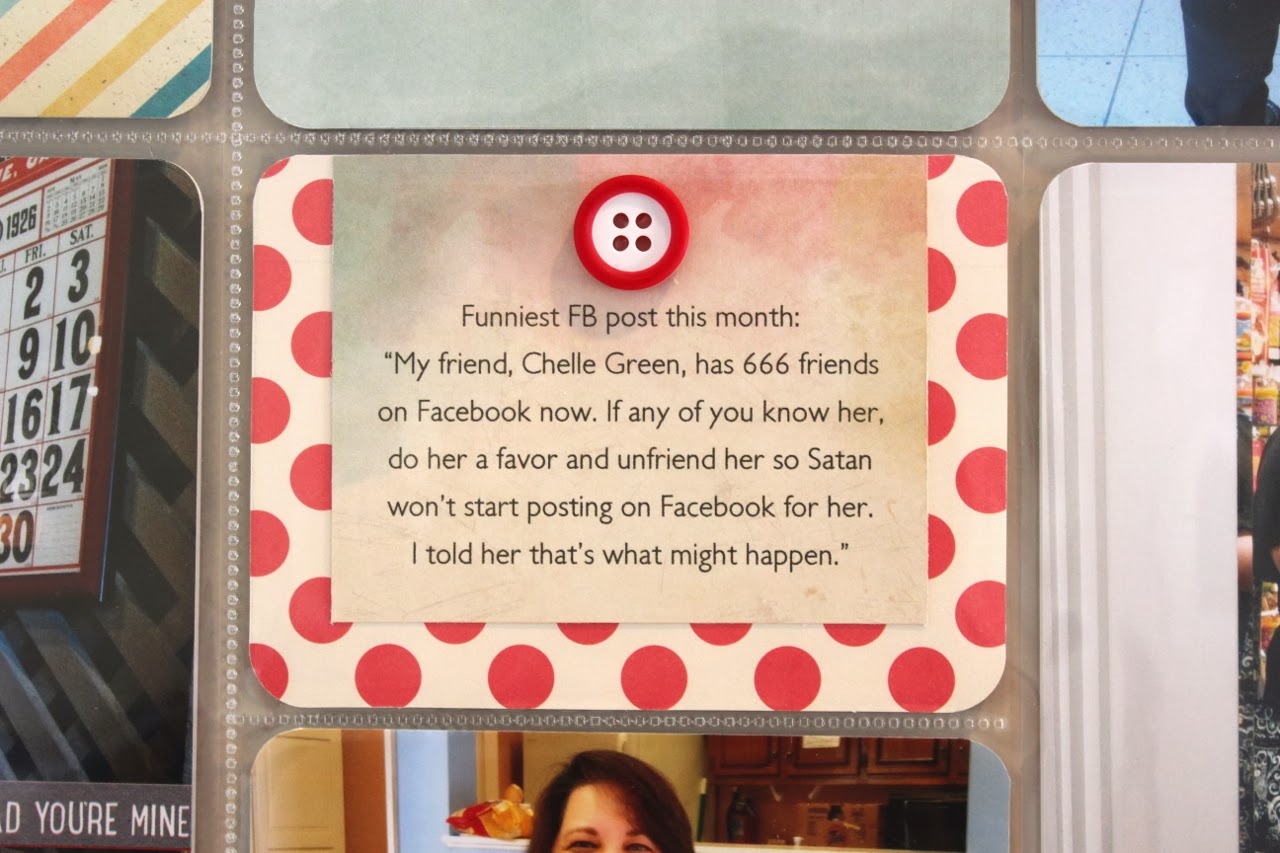 We laughed after I posted this because people kept unfriending her and then other people friended her. It went back and forth all night.
Design note: I tried putting that button inside the pocket but it was way too lumpy so in the end, it went on the outside.

I had these two pictures of Tiffany and me getting a bunch of $1 scrapbook steals at a local store.
While looking for some type of sticker to accent them with, I found this chipboard piece and realized it was perfect to describe us.
It was too thick to fit inside so I thought it would be a fun design choice to have it span the top of two pockets. 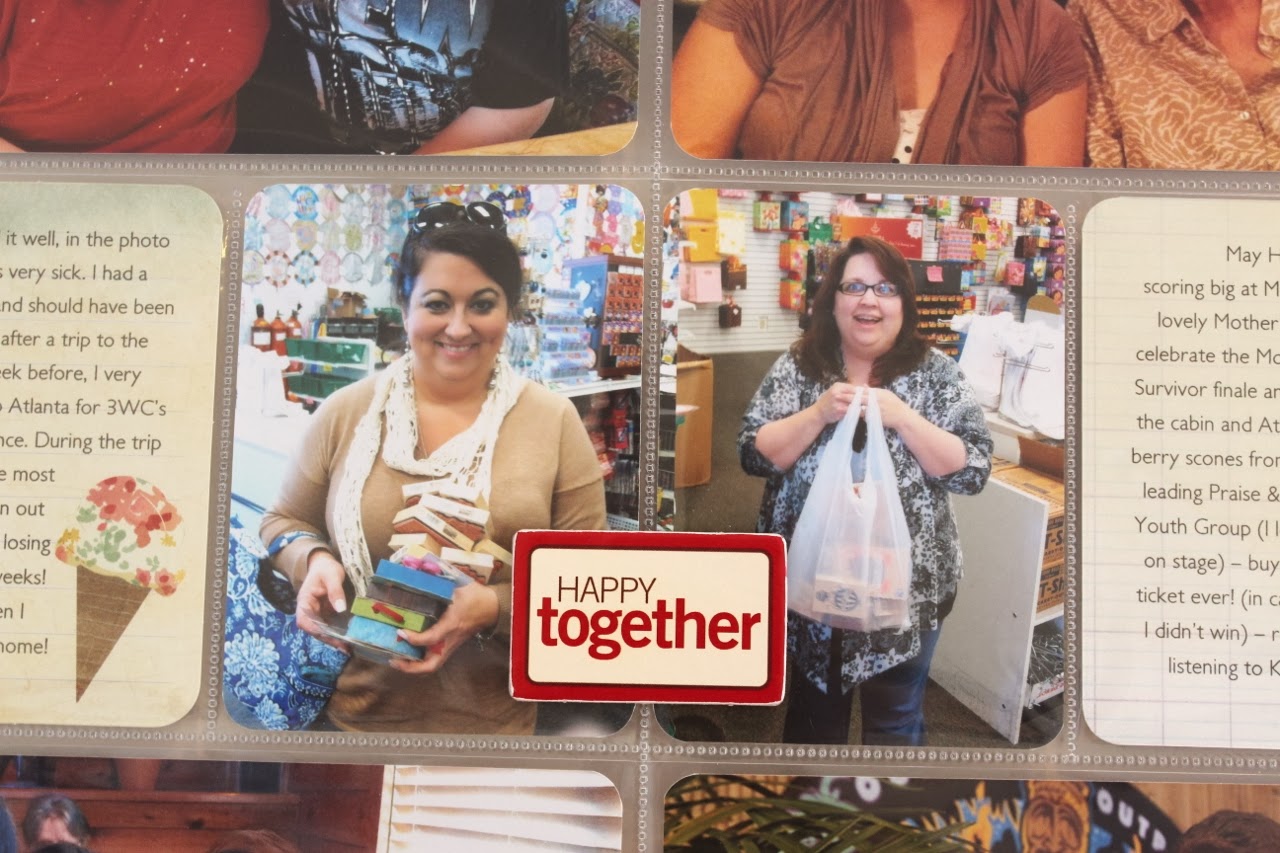 Survivor is my favorite show so I had to include this shot of Cochran after he won and that sticker rocked it. 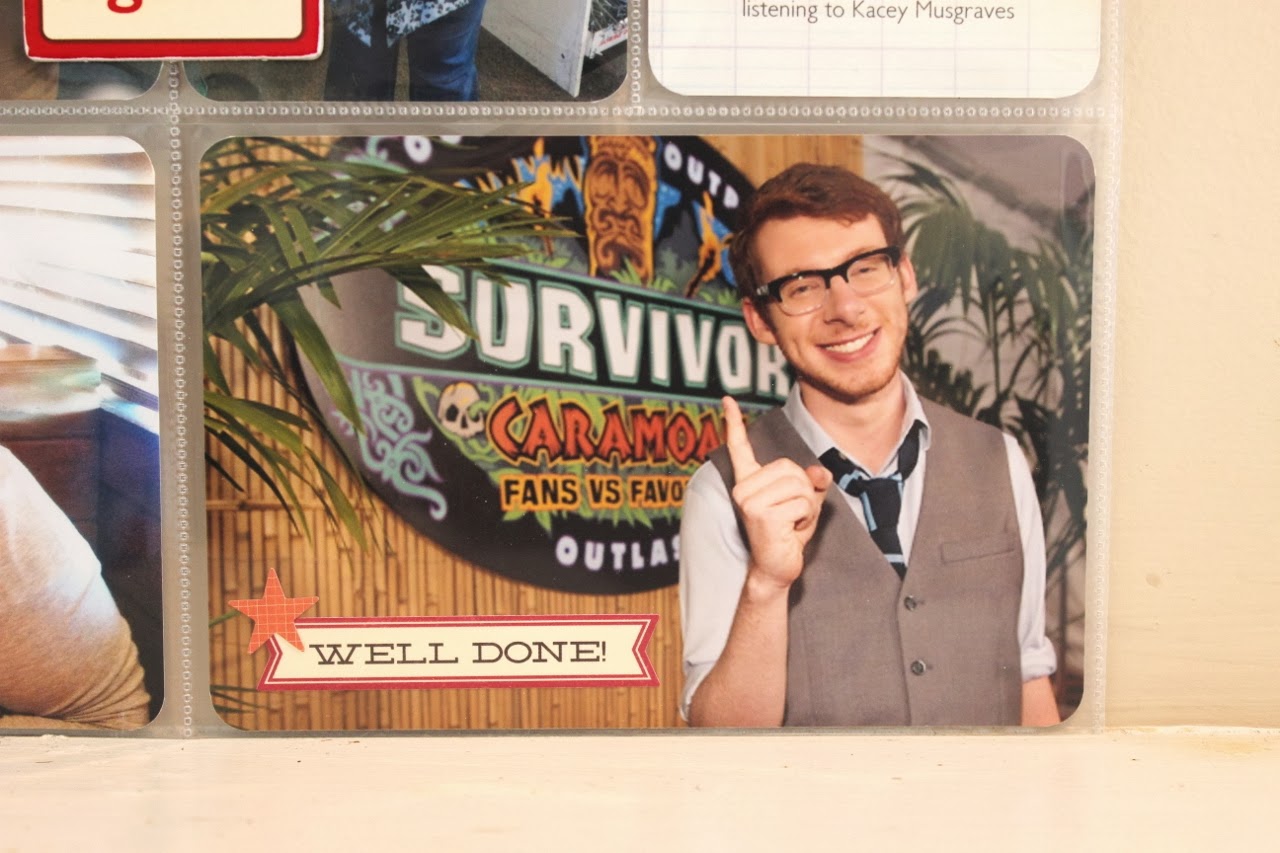 While I was looking for embellishments, I saw this sticker and thought it was perfect for this picture because when I look at this pic, I don't see a girl with her American Girl doll. I see my baby on the brink of being so grown that she no longer cares about dolls and now almost one year later, she has changed sooooo much in that respect. 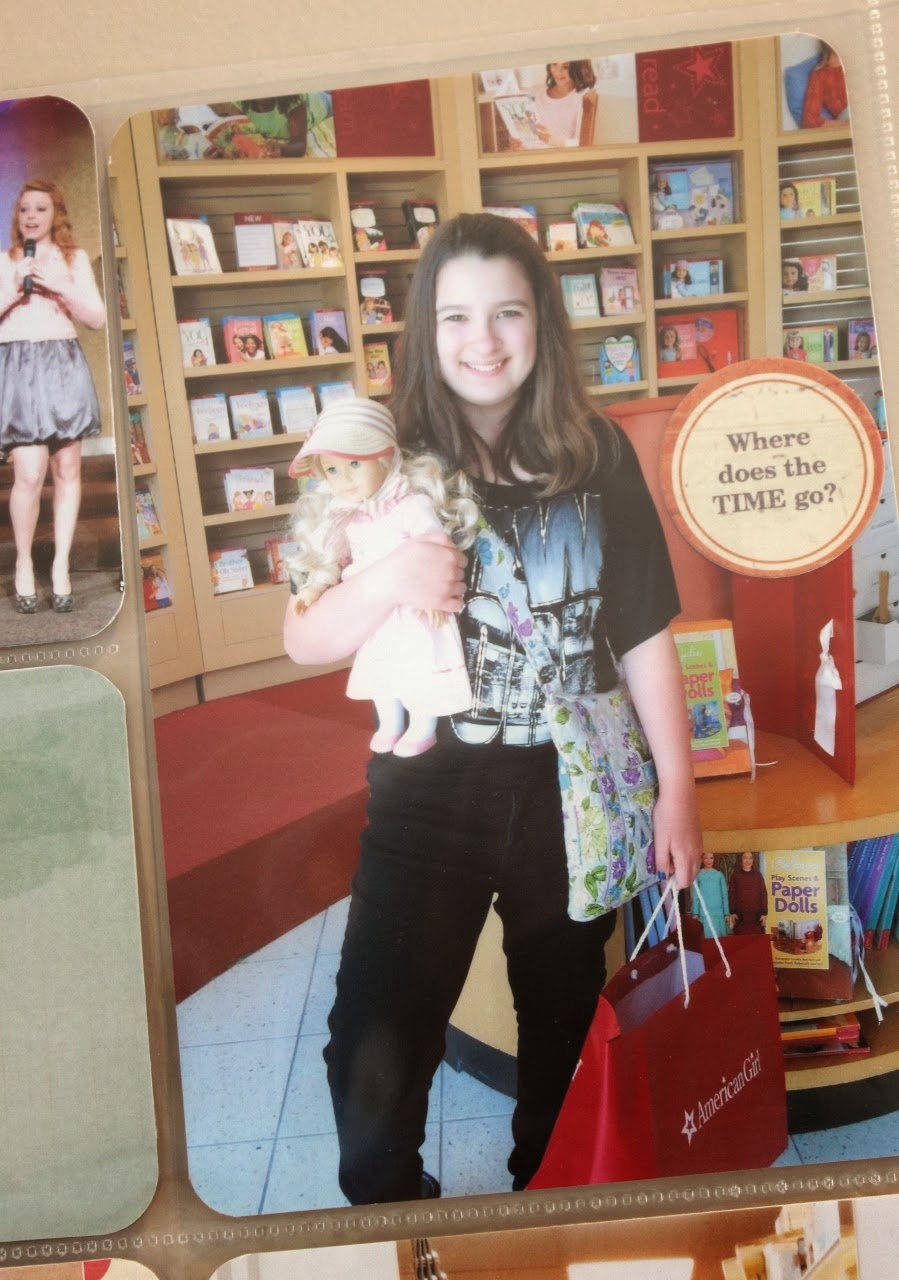 While I was making this spread, I had every intention of adding a page about Mike and a photo shoot we did that month.
I especially needed to since he's not in any of the other pictures from the month! He was probably working a lot.
But after I did the spread, I really didn't want to break it up with an insert and I felt the photo shoot pics would make a great layout.
So I'm leaving them out and oh well, if he's not in the pics, it's because we didn't see him much that month! 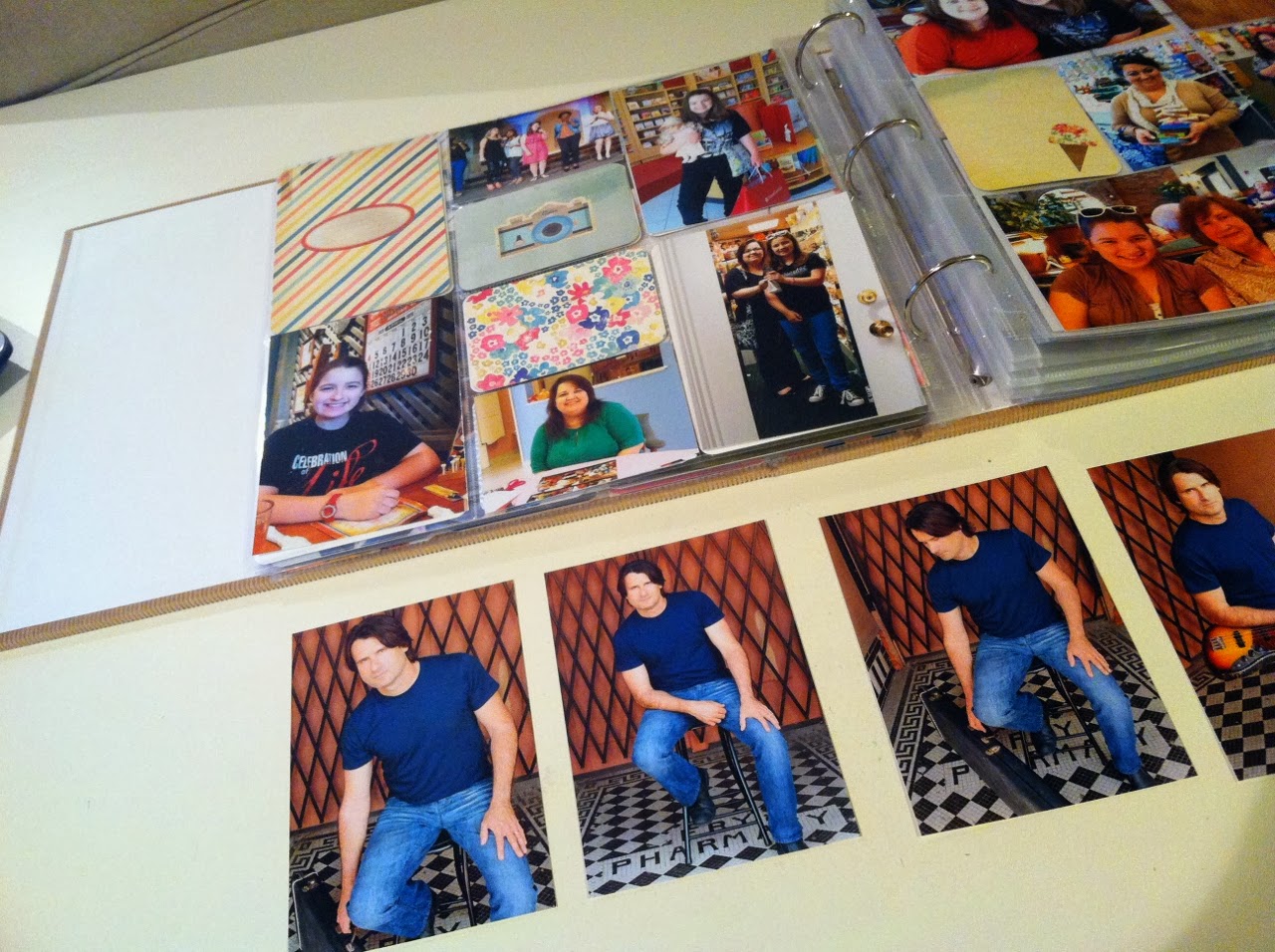 I bought the Simple Stories letter sticker sheet to use on his layout so I definitely will work on that soon. 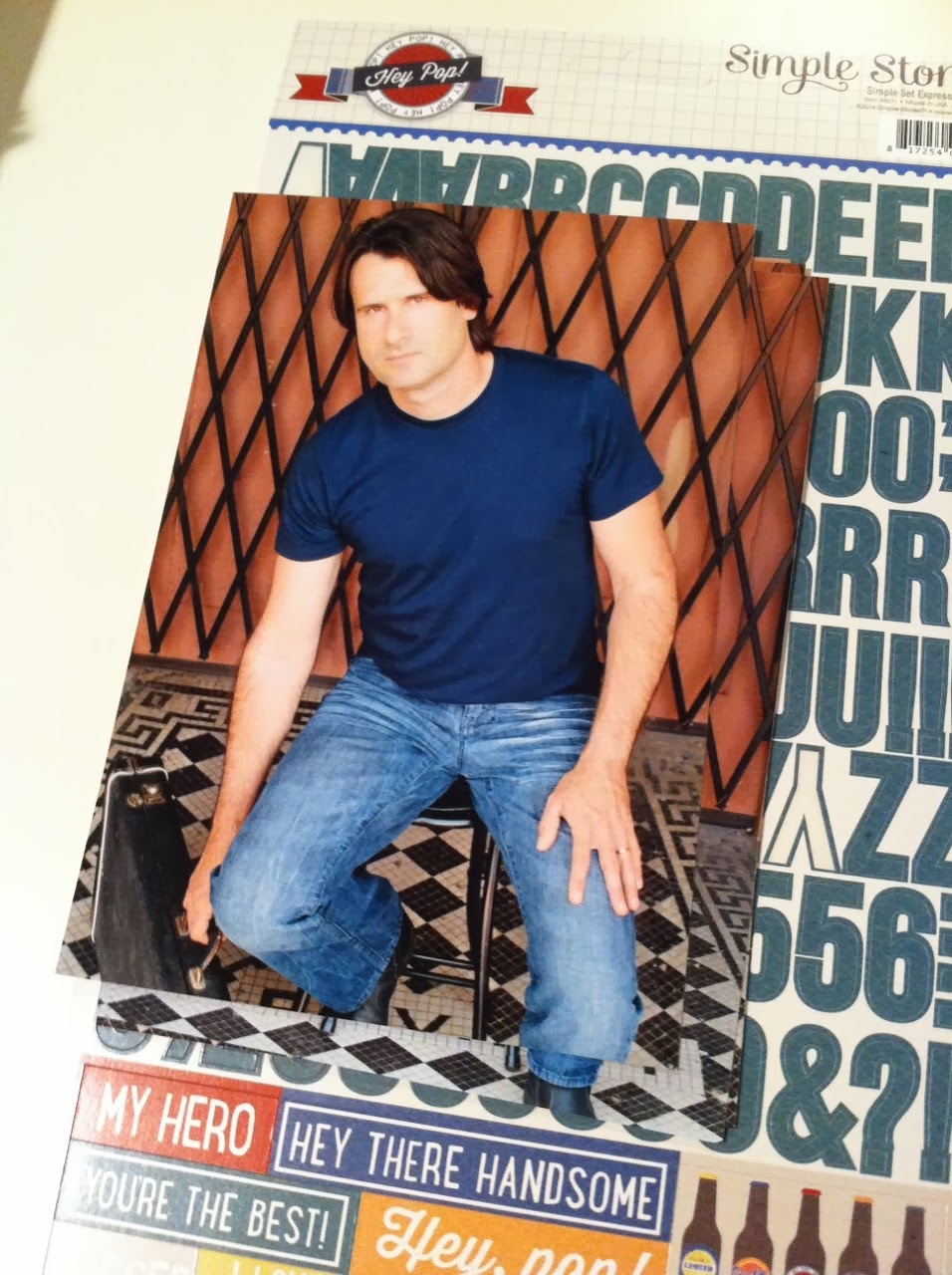 As I paired down the photos I would use, I had quite a few of Caroline left and I decided to keep those for a "13" album I'm making for her.
This is a pic from a day in May that she and her Daddy waded in a creek but how fun will this be for her 13 album? 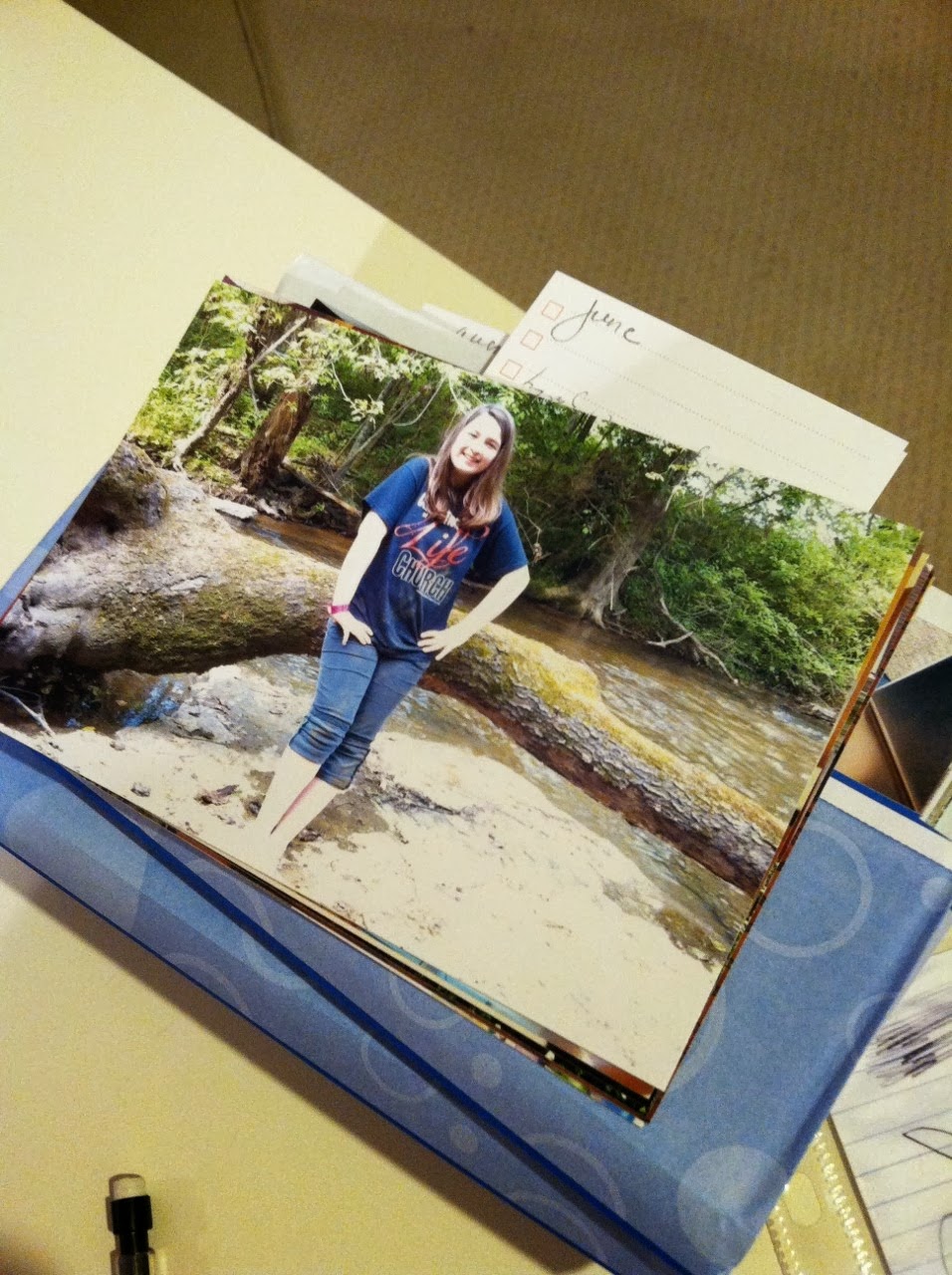 The point is...just because it happened in May, doesn't mean I include it, as long as I have given a good overview of the month.
Some photos are better used as personality photos and in another context. That's why I will never ONLY do Project Life scrapping.
I want to tell my more meaningful stories too and I need regular layouts and mini-albums to do that.
That's just how I work.

As always, I did a monthly highlights card and I really love how the whole spread came together. 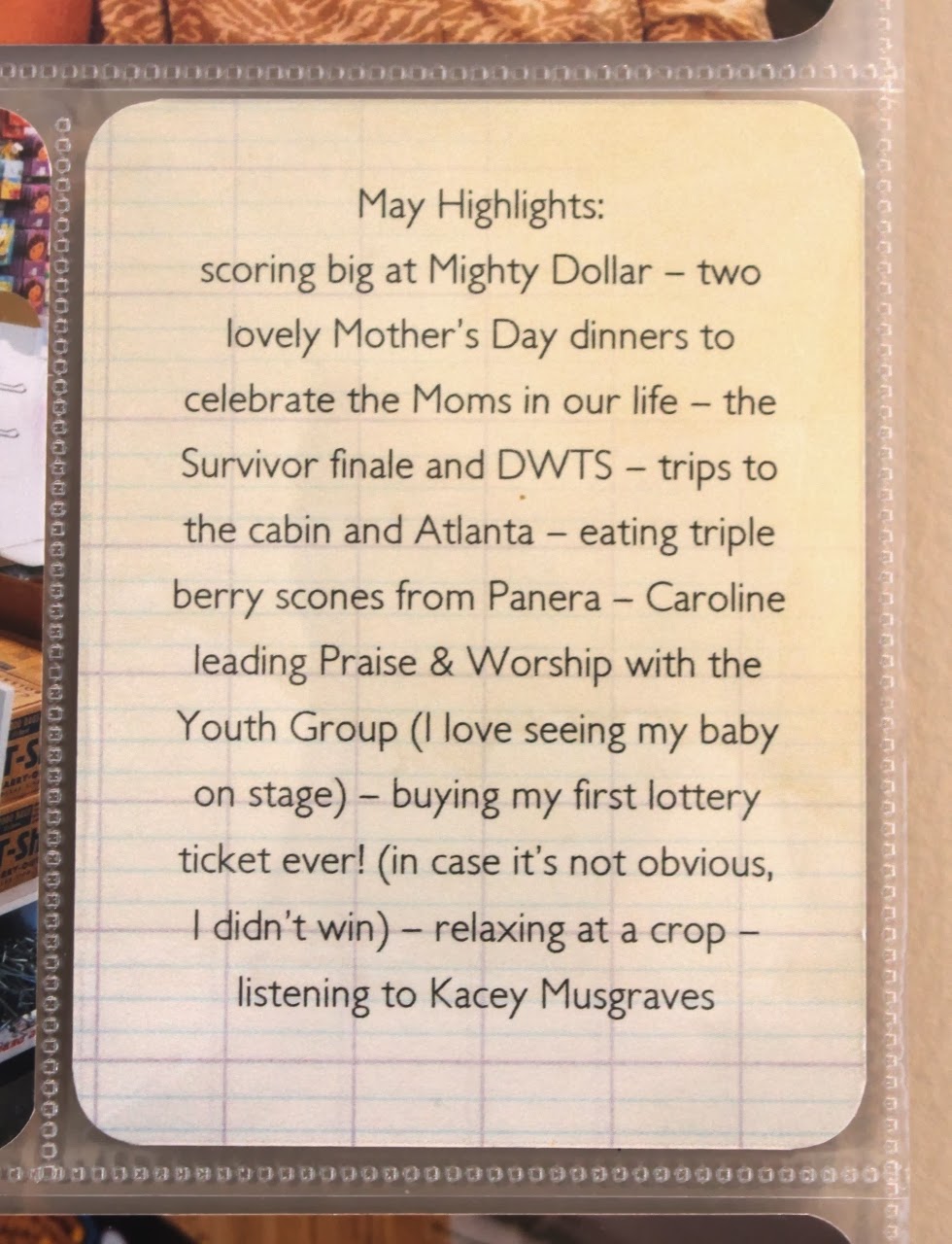 I'll be back soon with my June and July spreads. I hope this really long post was helpful in some way to you!
I shared my process in our first Project Life podcast but I thought it would be great to add photos to the story.

Happy crafting my peeps! Hope you're having as much fun crafting as I am!
Posted by TracieClaiborne at 12:03 AM

Your process is so different from what mine has been. I have always had digital folders by month and then by week and I chose the pictures for Project Life and put them in the folders as I took them (printed later, usually at home). I added a text file where I would put notes for each picture. I'm behind, though. Way behind. And your process does allow for choosing according to different page protector. (I, too, have seen the preference for Design A but have many other sizes to use up.). One thing I do regarding vertical pictures and Design A: I just plan to make those wallet size. I either put two side by side on a 4x6 horizontal pocket or I put them in one or more of the 3x4 pockets. Love your spread and look forward to seeing more.

P.S. You and Tiffany have inspired me that I need to either revive my blog or start a gallery on Two Peas to post some of my pages.

I love seeing your process, and although I don't do PL, there is a lot of stuff I can use in my regular scrapping.

Your pages look GREAT, Tracie! I love seeing people's process. Yours is great. Great pictures, too. Wonderful sale you caught! You inspire me to go get out my PL stuff!

I always love reading about other's processes! This was a FANTASTIC post! We are very different in our approach, but there's no rules in scrapbooking, and your pages came out awesome!! :)

I LOVE this post - all of it: your process, your pics, your explanations, your layout design. It ALL rocks! The step by step pics will prob be a great reference for other people. I'm glad you thought to include those. Way to go on making major progress with Project Life too! :)

resume that will land you interviews said...

A bit long project name of course. But on the other hand, you managed to fit it all into such a set, that you don’t have to worry about the integrity of the story. After all, the main thing is still the promise. http://fastcustomwritinghelp.com/blog/how-to-win-a-fight-with-an-essay-writing