I've been working on this steadily this month. Now I'm out of blank DVD's. Tonight, I spent about two hours and removed 10GB of pictures off my computer. I have 61GB left in "My Pictures." 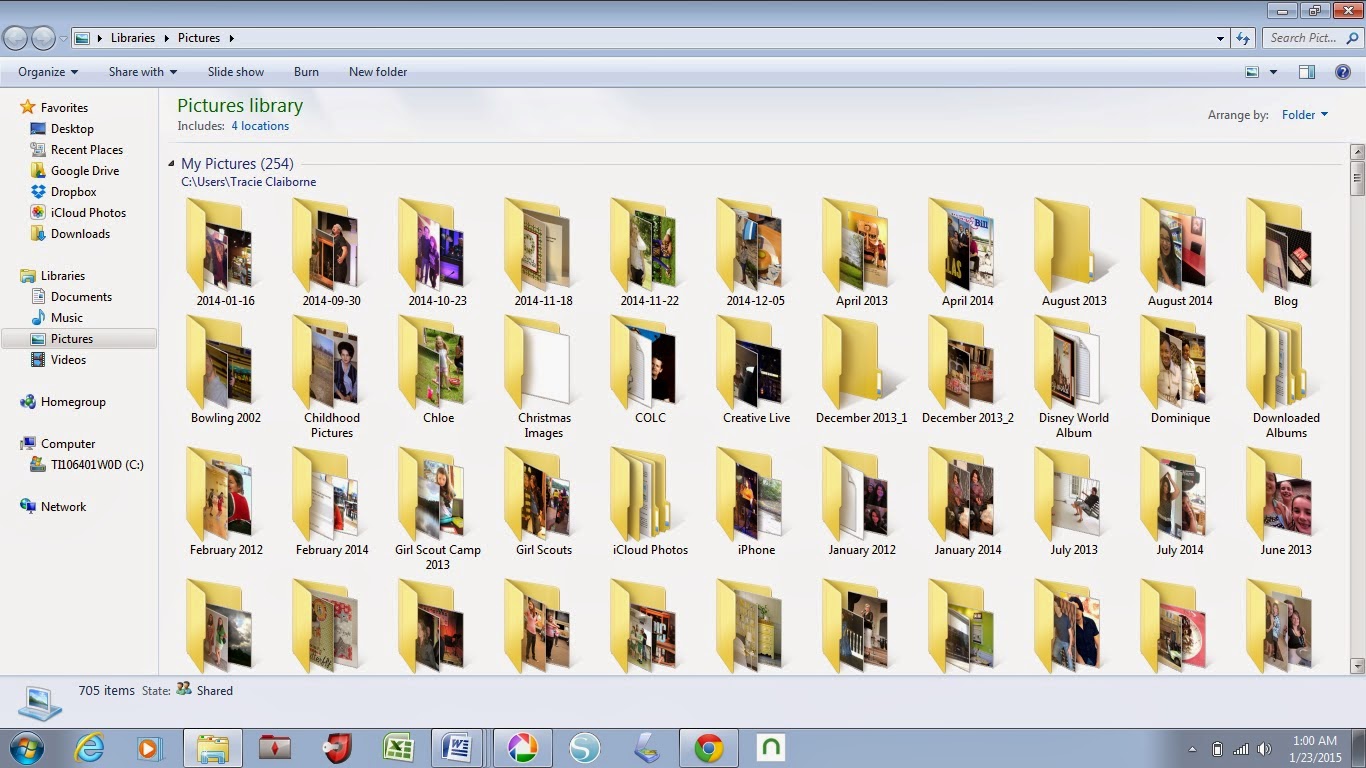 My computer says there's plenty of room on it (421GB of 581GB) but I notice is acting slower the more pictures I load. Also, it just worries me because currently I have 13,389 pictures on my computer. Some of those are images like printable scrapbook goodies I will be keeping on there but still, there's 13,000 images. At least 10,000 of that is photos and that's just wrong! I used to keep about 500 pictures on my computer. I don't know how it got out of hand.

I've burned my pictures to a DVD through mid-2013 so now I will buy more DVD's and finish 2013 and go ahead and do all of 2014. The time consuming part is culling through them and deleting all the duplicates and poor quality images. I've got to make myself do that more frequently because when you have to do photo triage on 10,000 photos, it's a daunting prospect!!

I know I should buy a backup hard drive. It's one of those things I need to buy but I never do. I think I saw one with 1 terabyte for $75 at Sam's which is hilariously cheap.

Here's some bad news...I just realized I missed a few pictures from 2012 as I was scrolling through. Ugh. Gotta go back and burn those! It's a slow process, peeps. 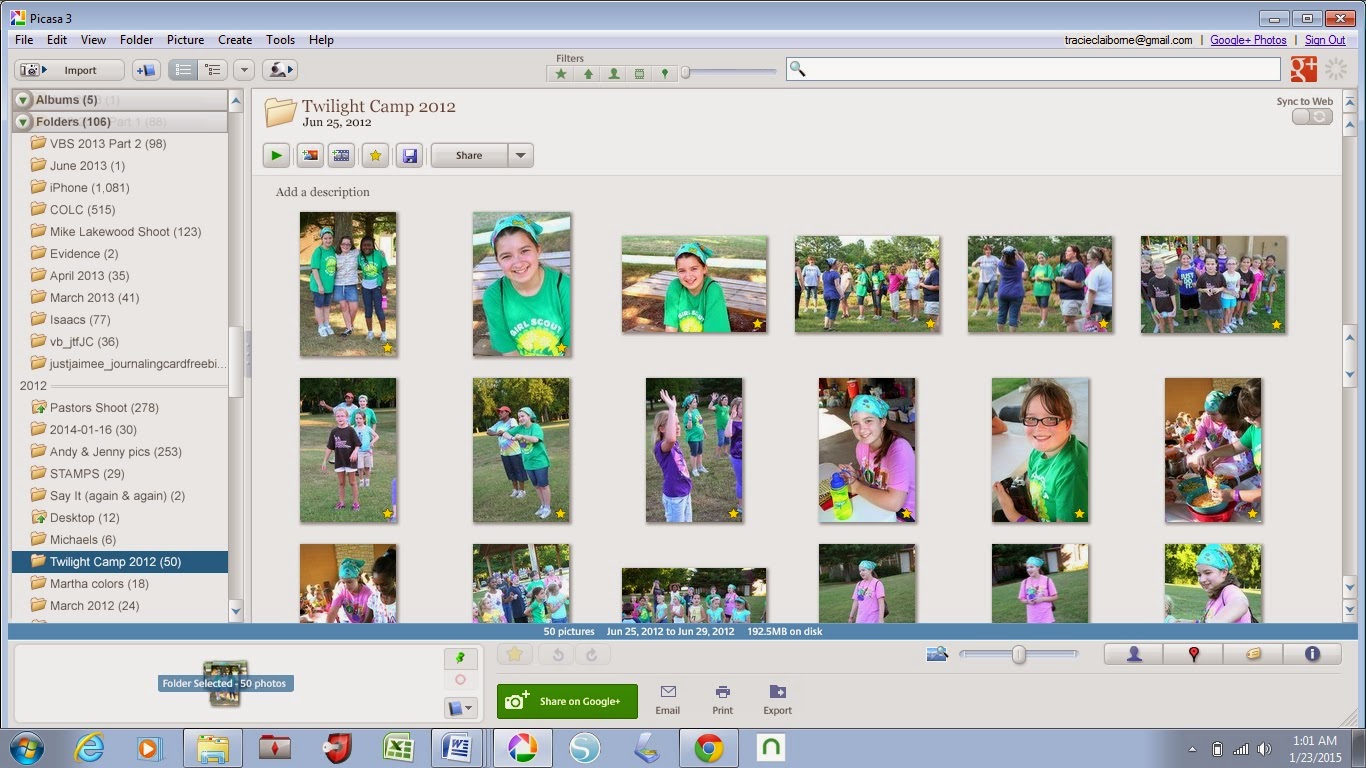 So how do you backup your photos and how many do you think you have on your computer now?
Posted by TracieClaiborne at 1:08 AM

External hard drives can and do fail, just like your computer can crash. I back up to USB drives, Flickr, cloud storage, etc - multiple places. If you have tons, at least back up the favorites.

I'm in the same spot. I'm working on backing them up to an EHD and burning disks. It's a monumental task at this point, but if I don't keep working on it, it'll just get worse. I take a lot of pictures - about 60 GB a year so I'll be working at it for a while!

The husband is the computer guru and he uses a back up program (Mozy). All of my pictures (10 years worth) are on the computer which the husband has been complaining about so I guess I should do some photo triage soon...

Good for you getting started on this daunting project!

I use Dropbox to automatically back up the photos from my phone. I only have a free account right now, but may pay for a larger one eventually, because with the size of digital photos, I keep running out of space. I have an external hard drive that most of my recent pictures are backed up to and I occasionally back some special ones up to Flickr (which is free.) I used to back up photos to CDs (which don't hold as much as DVDs, so was time consuming.) But neither CDs nor DVDs are truly permanent storage; they will eventually degrade. [http://www.archives.gov/records-mgmt/initiatives/temp-opmedia-faq.html] So I guess we'll all need to do a combination of things: print special pictures, back up locally and online. *sigh* ~ Laura

Just found your podcast and am having a great time listening back through the episodes. I love how you and Tiffany laugh a lot!

I am obsessive about backing up my photos. I use 3 external hard drives. One is on my desk, one is in a fireproof safe, and one is at my daughter's house in another city.

The problem with DVDs is that they are going to be obsolete pretty fast. It is getting harder to even find a DVD player and a lot of new computers don't have a DVD slot anymore. It reminds me of when 8mm video was going away. I had to quickly burn all my daughter's childhood videos onto DVD. Now, I feel like they need to be transferred onto a hard drive.

At least, you will always have your scrapbooks if the digital images became hard to access.

Christi said...
This comment has been removed by the author.
11:33 AM

All of my photos are on an external hard drive and duplicated on a second EHD that stays upstairs on my desk. I use Lightroom so it is super easy to import new photos into the same folder structure. I'm behind in backing up to a DVD though.
I'm also starting to back up my photos to the Amazon Cloud as a 3rd option - off site from the house.

I'm ok with CD/DVD being "obsolete" someday. I'm looking for storage for right now, not 100 years from now. I can change then the same way people copied 35mm film to VHS and then DVD and then whatever is next.