Confession time. Last month when I posted my January monthly spread for my Artful Memory Planner, I kind of convinced myself I would never be able to replicate the cuteness because it was literally my favorite project I had ever made.

So this month when I sat down to make my February pages, I felt intimidated by the thought of making something fresh that I would be thrilled with. Thankfully, once I got going in my process, all my fears were put to rest because I began to love it even more than the January spread!! It's just that whenever you put together little squares of patterned paper, in the end you go, OH FOR CUTE!

This makes my heart happy... 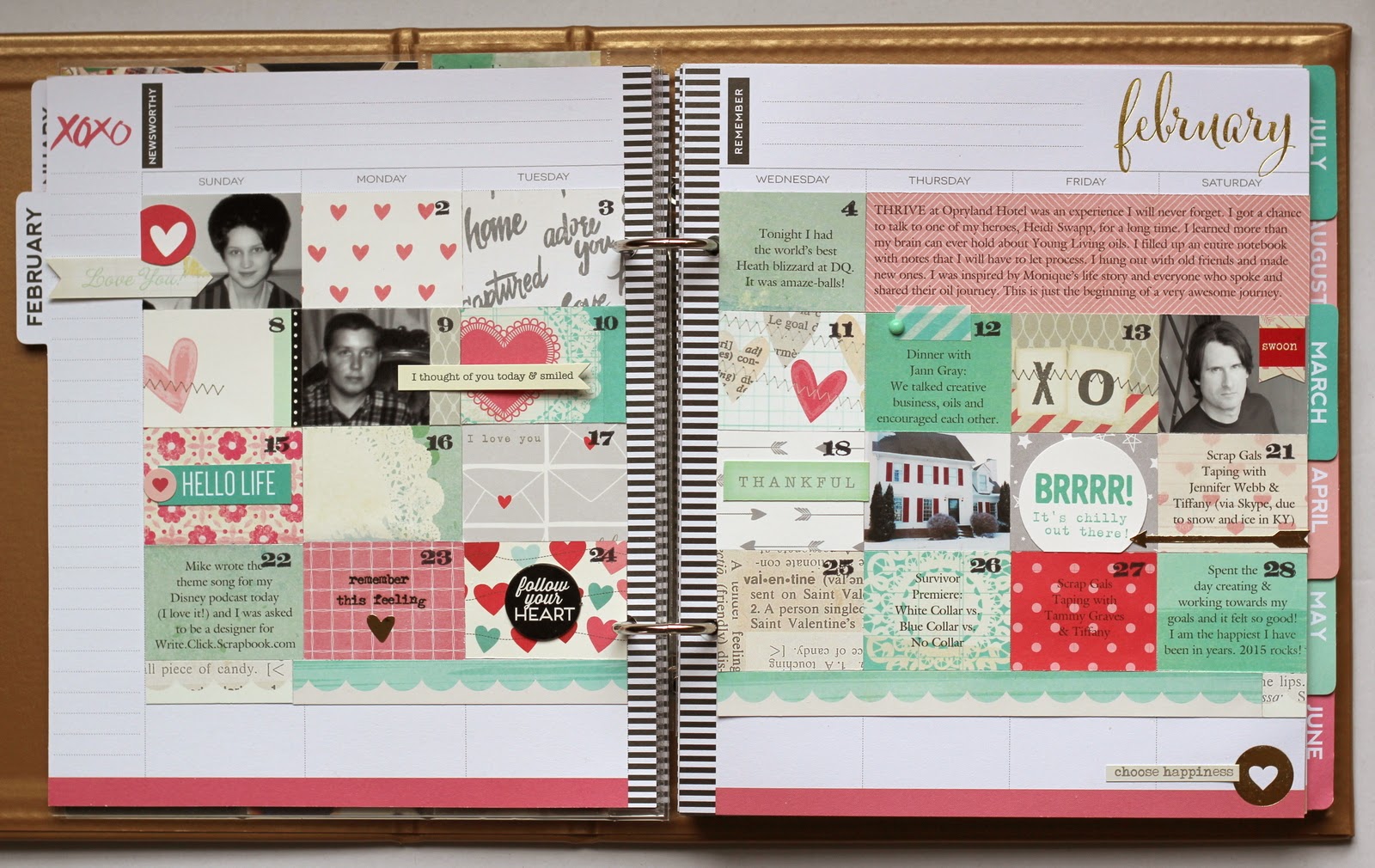 On the 5th, 6th and 7th, I attended a conference and it was very important to me so I did a bit of journaling there. The BRRRR! embellishment is from an Elle's Studio monthly club kit that I just got and loooovvvveeeee. The arrow on the 21st is gold but it did not photograph well. 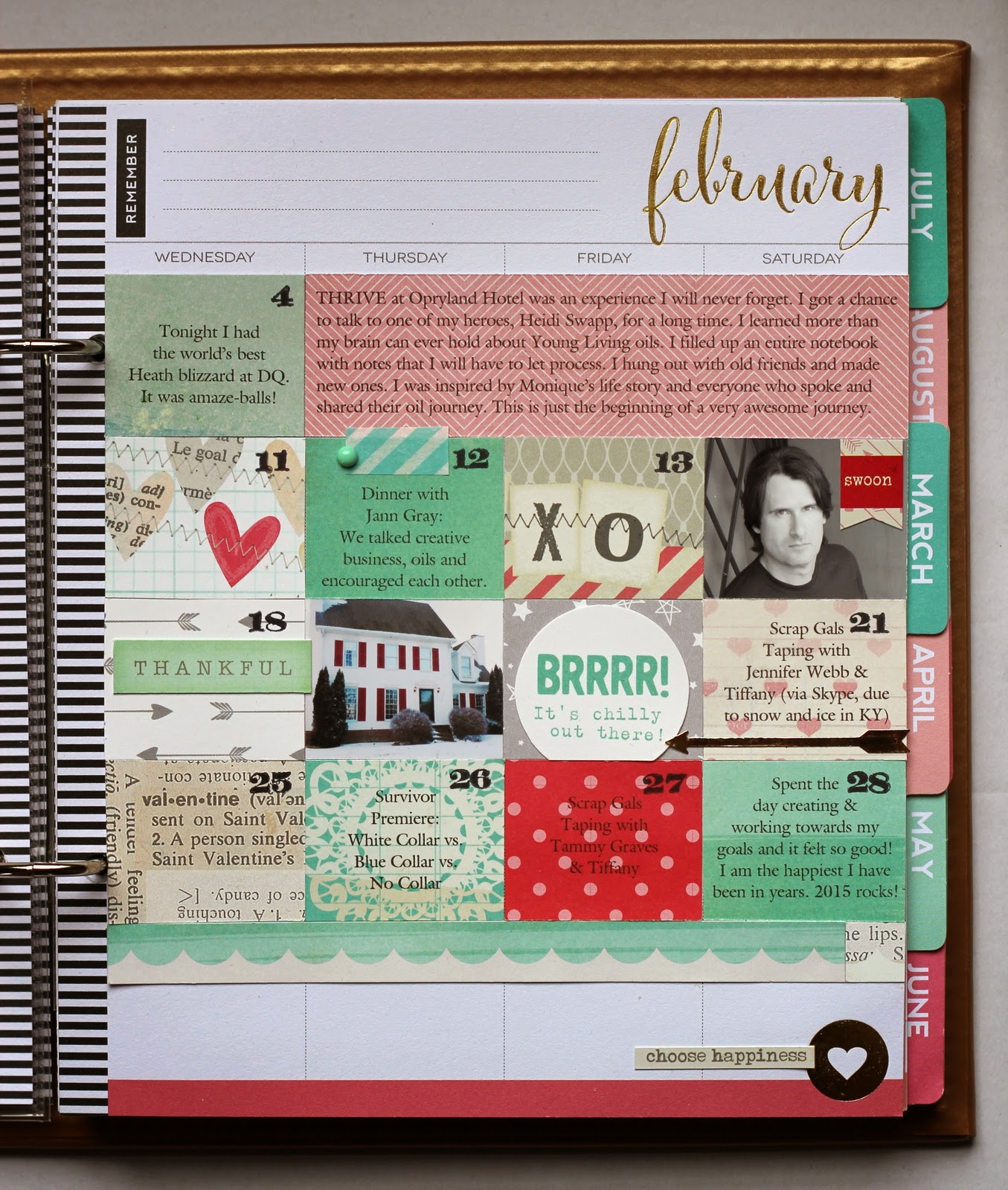 The colors on these photos are a bit off because it's an overcast day today and I spent longer than I really intended do trying to do these pages justice. I may scan them and repost later tonight.

I had a really great day on the 22nd and I was still giddy from it the next day so I used a Tim Holtz rub-on that said "remember this feeling." About four great things happened that day, more than I could tell in the daily square but I will journal on a page after this spread. The little heart on the 23rd is gold, you just can't tell in the pic! 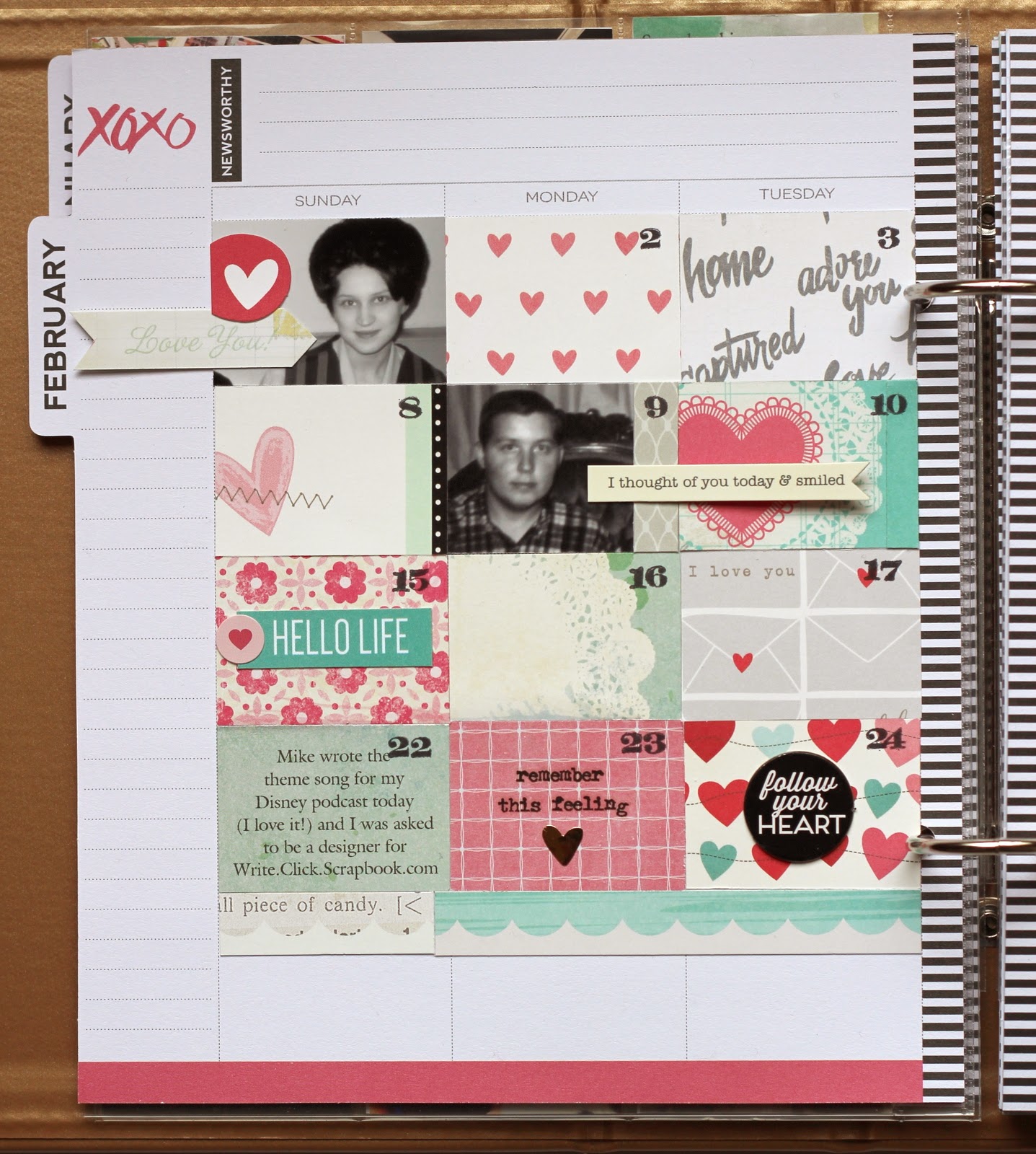 I intentionally left some squares blank with just pretty paper because I want your eye to have a place to rest amid the chaos of the journaling and patterns. I used a great new stamp set from Hampton Art with numbers just the right size. I like how fat and cute they are.

I'm staying in a similar color scheme for the layouts I'm making for this month but will probably use different papers. My husband has helped me out with my creative business goals lately so I want to do a page about him and all he does for me. I also will do a collage page with my iPhone pics but I'll probably make a mini-album about my conference. I have a lot of great pics and it needs its own little book.

To start this month's spread, first I grabbed the planner I carry in my purse. February was blank because I bought it in the end of February so I went through my Instagram feed to see what I had done every day and checked my texts and Facebook posts to fill in the gaps. Social media really does give me a clear picture of the life I live. I scribbled the things in I wanted to remember. See how messy this is? This is my real handwriting - don't judge! :) My March spread is neater because I'm actually using it every day to organize my life. 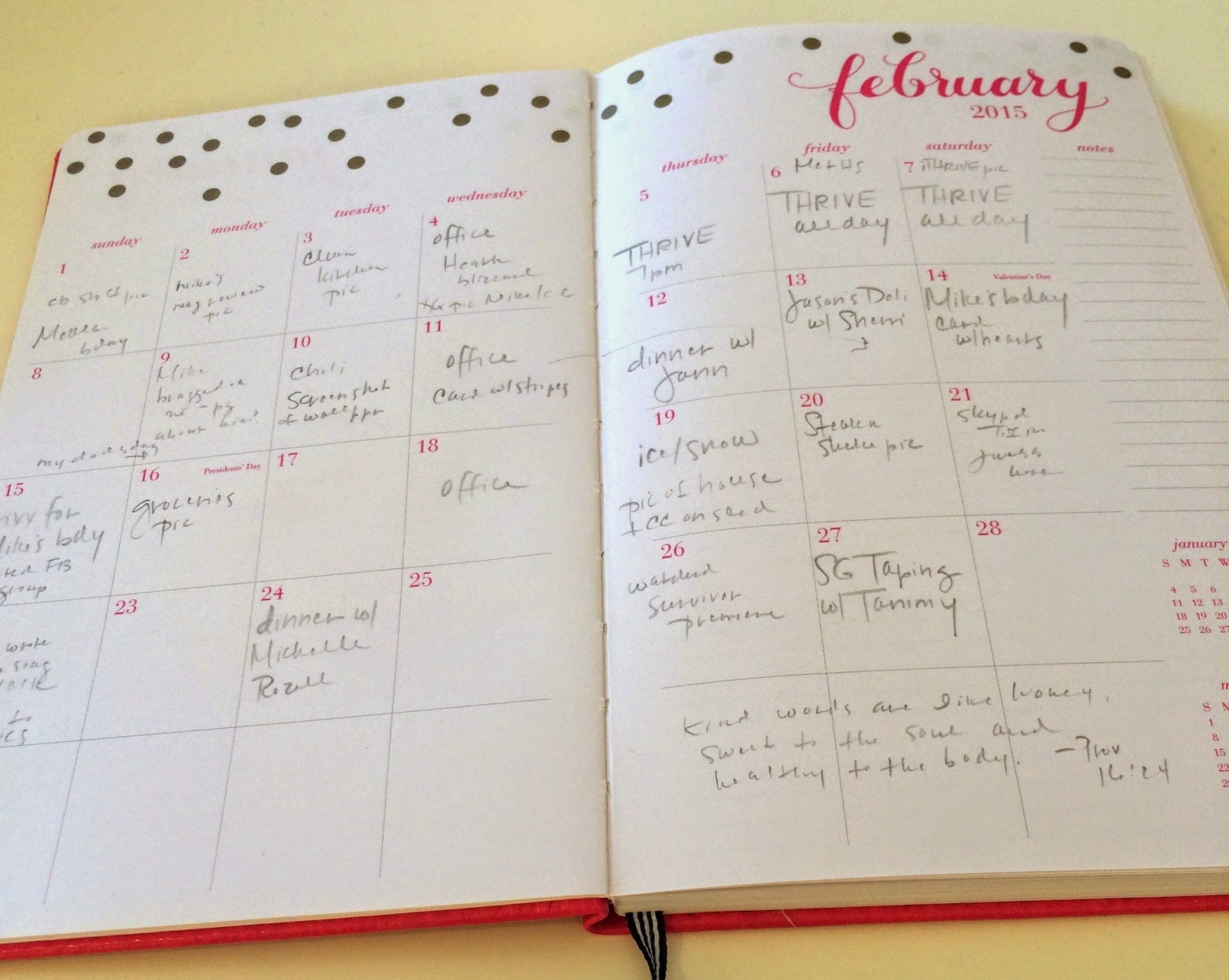 Next, I pulled out my favorite papers that were heart/love related and in this color scheme... 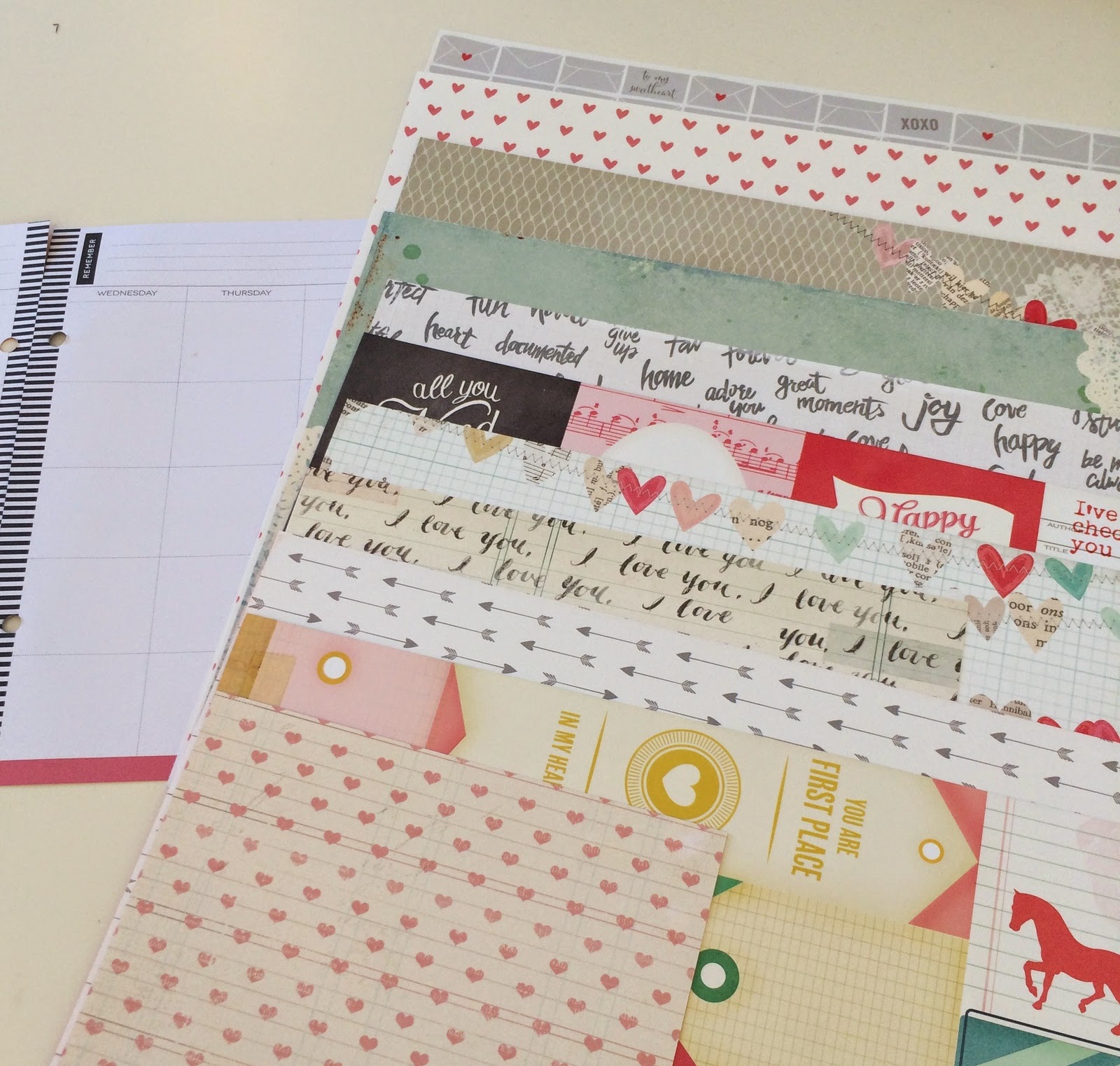 Then I cut strips off the bottom the same height as the rows in the planner... 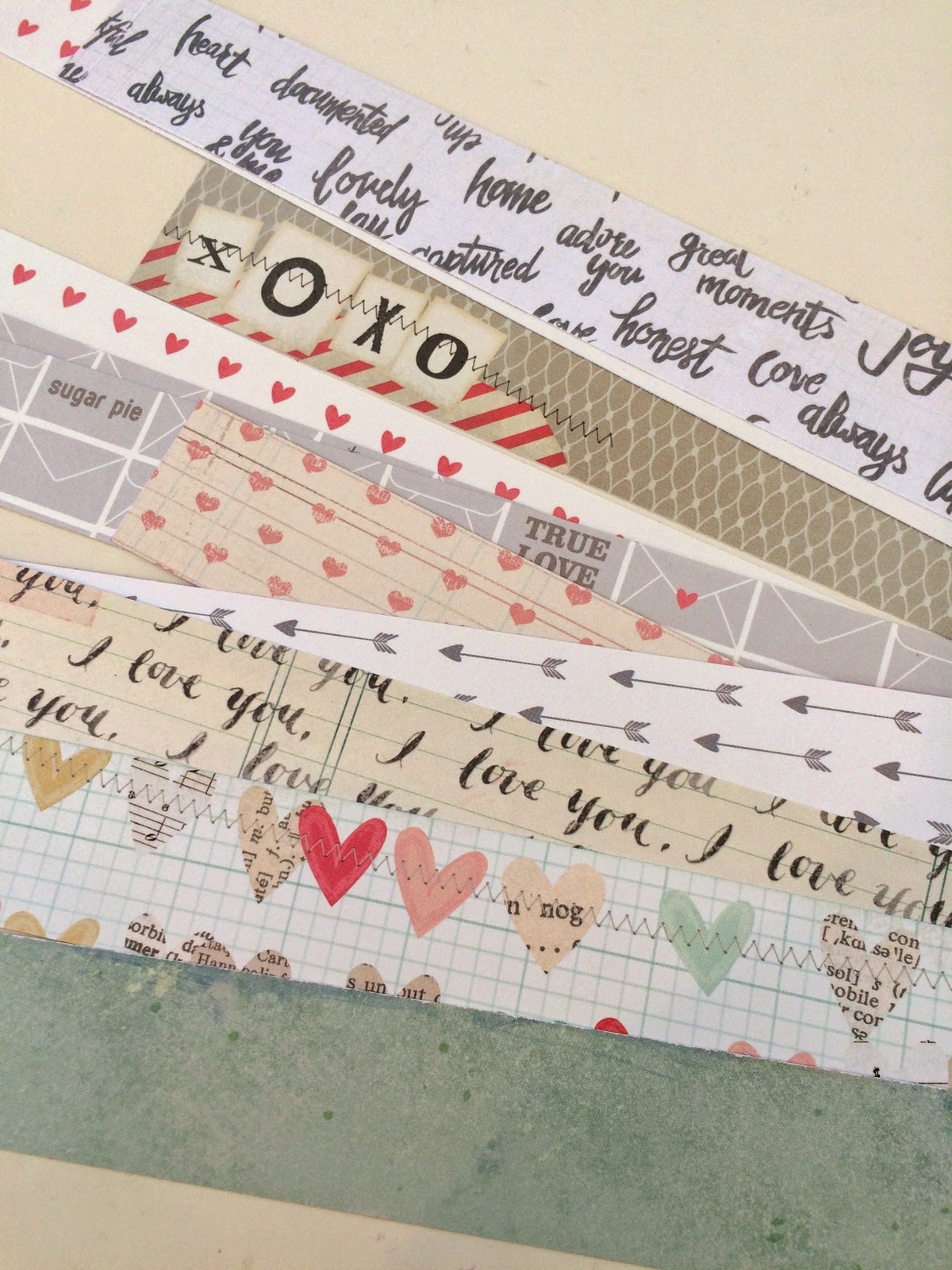 I figured it would be easier to put the paper back in my drawer being just a little shorter instead of having a square cut off each one. :)

Once I had those cut, it was very easy to start laying out my patterns. 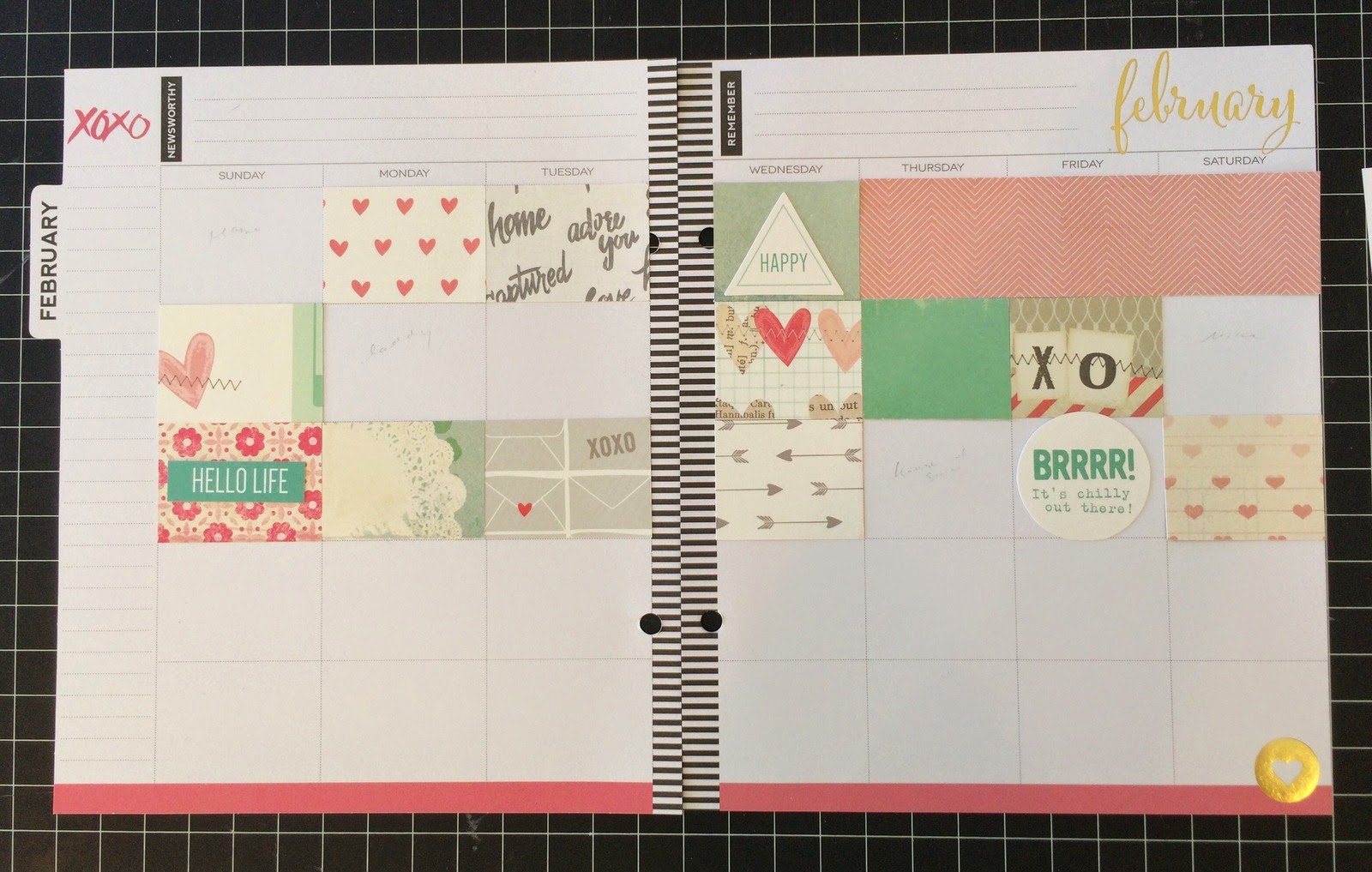 I laid out all the patterns and left a space for the pictures. Then I converted the pics to black and white in Picasa. After that, I imported them into Word and using a text box to size them to the right size, I printed them. I use Canon Luster 8.5x11 paper which is the best photo paper I've ever found.

After that, I just went through my one million embellishments until I found a few that worked and called it done!

I hope you enjoyed seeing this month's spread and learning a bit about my process. Have a great day my lovies!

Posted by TracieClaiborne at 2:43 PM

I live the mix of photos and journaling and patterns. Very pretty!! And I like your handwriting!!

Your planner spreads make me SO happy!!! I love how you have created them, Tracie!! So glad you are having a great 2015 - thanks for sharing!

i totally dig it! i think you using it like a project life is fabulous. tracie, i saw your spring post on write click scrapbook yesterday! i was super excited. i pinned it. this was way before i even heard your announcement cause i just barely finished the latest scrap gals episode. so happy for you! :)

Love the colours, so cheerful!